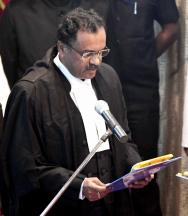 Menon will be taking charge on August 17.

Now, Justice Bose has been elevated as the Chief Justice of Jharkhand High Court.

Mumbai High Court’s senior most judge, Justice V.K. Tahilramani, has been elevated as the Chief Justice of Madras High Court, replacing Justice Indira Banerjee, who has also been elevated to the apex court.