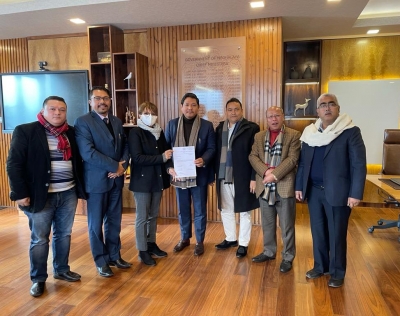 Shillong: In a significant political development, all five Congress MLAs in Meghalaya on Tuesday told Chief Minister Conrad Sangma that they wish to join the National People’s Party (NPP)-led Meghalaya Democratic Alliance government, in which the BJP with two MLAs, is also a partner.

The five Congress legislators led by their legislature party leader Mazel Ampareen Lyngdoh met Chief Minister Conrad Sangma at the civil secretariat and handed over a letter, signed by five MLAs, expressing their willingness to formally join the MDA government.

The letter, available with IANS, mentioned: “We wish to support you and the MDA to strengthen the government’s arms and decision making, so as to ensure that our joined efforts will take the state forward, in the general interest of its citizens.”

Later, Lyngdoh said that they have no relations with BJP and they are not concerned who the other parties supporting the MDA government.

“I am not aware whether they (BJP) are in the alliance or not. We did not ask the government who are their allies. Congress MLAs have decided to support the MDA for the development of Meghalaya,” she told the media.

She declined to reply directly whether they took approval from the party high command before announcing to support the MDA government.

She said: “We are the five (MLAs) and we are capable of deciding for the good. Politics is about the state’s interest and players are also in the state. We will, however, remain in the Congress.”

Meanwhile, Chief Minister Sangma said that in politics there are no permanent friends or foes, and since the Congress’ interests align with the MDA they are welcome in the alliance.

Former Meghalaya Chief Minister Mukul Sangma earlier criticised the Congress MLAs’ decision to support the ruling NPP and had urged the Congress lawmakers and leaders in the state to join the Trinamool Congress (TMC).

“It is a reflection of the fact that the Congress in the state of Meghalaya is in a complete disarray. They are victims full of confusion. That is the reason why I have said that instead of remaining in the Congress, if they have the resolve to serve the people and the state, it is time for them to join the Trinamool Congress,” Sangma had told the media.

Mukul Sangma along with 11 Congress MLAs joined TMC in November last year and after that the Congress MLAs verbally had announced their support towards the NPP led MDA government.

After the 12 Congress MLAs led by Mukul Sangma joined the TMC on November 24, the party’s strength reduced to five in the 60 member assembly.Before November 24, the Congress’s main rival in the state was the NPP and with the TMC’s entry into the northeastern state forced the Congress to come closer to the NPP for its survival.

Assembly elections in Meghalaya are due in February-March next year (2023). (IANS)