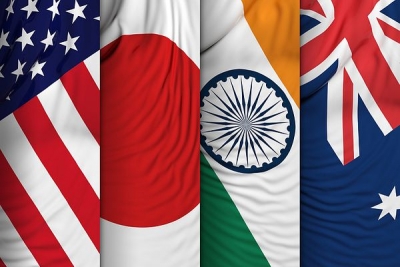 The just concluded fourth Quadrilateral Security Dialogue or Quad summit in 15 months, held in Tokyo earlier Tuesday, appeared a little different and signalled a clear resolve among the four member nations to move ahead to make this grouping a “force for good.”

“Today in Tokyo, we convene for our fourth meeting, and our second in person, to demonstrate, at a time of profound global challenge, that the Quad is a force for good, committed to bringing tangible benefits to the region,” a joint statement issued after the summit said.

This was the second in-person summit of the leaders — Prime Minister Anthony Albanese of Australia, Prime Minister Narendra Modi of India, Prime Minister Fumio Kishida of Japan, and President Joe Biden of the United States – in less than nine months, indicating an urgency to give a direction and substance to this group of four democracies, which had a rocky start when it was first conceived in 2007. Revived in 2017 at the level of officials, today’s Quad summit of leaders of four leading democracies shows the intent to ensure that Quad works and delivers.

“In our first year of cooperation, we established the Quad’s dedication to a positive and practical agenda; in our second year, we are committed to deliver on this promise, making the region more resilient for the 21st century,” the joint statement says.

The key areas of focus, other than security and upholding the rule of law in the Indo-Pacific region, are health, infrastructure, resilience of supply chains and sustainability of the initiatives taken, particularly on the climate.

Speaking about today’s meeting, Ambassador Deepa Gopalan Wadhwa, former Indian envoy to Japan, spoke of how much the Quad had evolved, to a position where it could deliver in core areas like vaccine development and delivery, and about how the joint statement indicated that India’s core concerns, re terrorism, particularly, and its position on the Ukraine crisis had been accepted and adopted by the four nation group. Australia, Japan and the United States have been far tougher on Russia and there were suggestions that India would be brow-beaten but, as Foreign Secretary Vinay Kwatra also pointed out, India’s position, about the inviolability of sovereign boundaries and territorial integrity and the need for cessation of violence as the only way out of the crisis, has been appreciated, even accepted.

While the leaders have been at pains to state that their grouping is not aimed at any one country, some of the areas of focus and some of the emphases in the joint statement, issued after the summit, leave little room for doubt that China is the country Quad aims to counter, particularly in the Indo-Pacific region. The summit happened when relations between China and several Quad members, including India, are tense, as Beijing increasingly challenges the international law of the seas and has resorted to coercive trade practices. The statement that Quad opposes “any provocative or unilateral attempt to change the status quo in the region” leaves little scope for ambiguity.

The emphasis on building infrastructure in the region and addressing debt servicing and sustainability issues is clearly intended to highlight the major failures of China’s Belt and Road Initiative, most dramatically in Sri Lanka. Helping countries cope with their debt and making a commitment of $50 billion of infrastructure assistance and investment in the Indo-Pacific, over the next five years, the Quad countries have indicated their willingness to now walk the talk.

“We reaffirmed our shared commitment to deepen cooperation on infrastructure, which is critical to driving productivity and prosperity in the Indo-Pacific region. We also share a commitment to addressing debt issues, which have been exacerbated by the pandemic in many countries,” the joint statement said.
The unequivocal reiteration that Quad is, at the core, a group to uphold international law and their security interests in the Indo-Pacific, indicates how this summit plans to provide countries of the region with an alternative to Chinese belligerence and dominance.

“The Quad is committed to.. adherence to international law, particularly as reflected in the UN Convention on the Law of the Sea (UNCLOS), and the maintenance of freedom of navigation and overflight, to meet challenges to the maritime rules-based order, including in the East and South China Seas. We strongly oppose any coercive, provocative or unilateral actions that seek to change the status quo and increase tensions in the area, such as the militarization of disputed features, the dangerous use of coast guard vessels and maritime militia, and efforts to disrupt other countries’ offshore resource exploitation activities,” the statement said. – INDIA NEWS STREAM