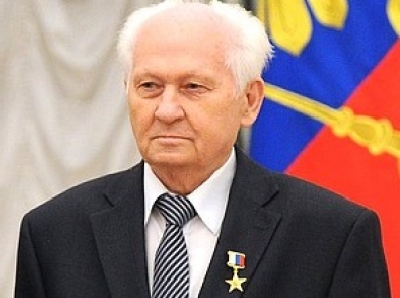 Kamnev, 85, was the scientific director of the Almaz-Antey Aerospace Defence Concern and the expert who developed deadly Kalibr missiles deployed by Vladimir Putin in Ukraine, Daily Mail reported.

He was responsible for more than 20 weapons inventions and co-author of over 300 scientific and technical reports.

He worked until his death as scientific director of arms giant Almaz-Antey and chairman of Novator experimental design bureau where Kalibr missiles were created.

A video shows him being made a Hero of Labour by Vladimir Putin in 2016, the media outlet reported.

He lauded Putin for the ‘highest appreciation’ of his missile-making work ‘so that our country can live in peace and security’.

He spoke before his Kalibr missiles were used to decimate infrastructure and civilian targets in Ukraine.

He was the brains behind Putin’s dreams of the Russian exploration of the moon and outer space.

He was chief designer for the light and heavy versions of the Angara but for the later years of his life was dogged by a criminal case launched by Putin’s authorities into alleged fraud and embezzlement of more than 57 million pound.

He hailed the Angara as the “world’s best” rocket system, and he was seen internationally as a leader in his field.

And on December 25 General Alexei Maslov, 69, former commander of Russian ground forces with close ties to Ukraine, died ‘suddenly’ the day after Vladimir Putin abruptly cancelled a trip to the tank enterprise where he worked as an international sales ambassador.

At NATO, Maslov worked alongside Dmitry Rogozin, an official close to Putin who was abruptly removed in the summer as head of the Russian Space Agency, Roscosmos.