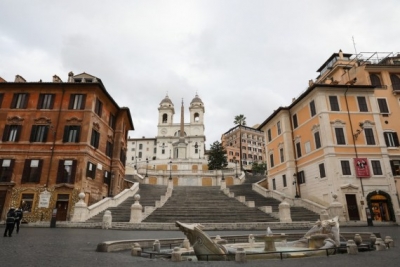 June 17, 2021
Rome: Italy’s National Institute of Statistics (ISTAT) said that the country’s incidence of absolute poverty hit a record high level in 2020, interrupting a downward trend in the previous year.

Over 2 million families, or 5.6 million individuals, were estimated to live below the economic standards defining extreme deprivation in the country, Xinhua news agency quoted ISTAT as saying on Wednesday.

“After improving in 2019, absolute poverty in the pandemic year reached the highest level registered since 2005 (the year in which this specific analysis series began),” the institute noted in its report.

“While the incidence of families in absolute poverty turns out higher in the South…the largest increase was in the North, where it grew to 7.6 per cent in 2020 from 5.8 per cent in 2019,” it explained, as the north was more affected by the coronavirus pandemic.

In fact, the latest data showed absolute poverty affected 8.6 per cent of foreign families whose children hold Italian citizenship and 28.6 percent of those whose children have not yet acquired it.

Overall, absolute poverty in Italy here started to increase sensibly in the past decade, after the country suffered the impact of the global financial crisis in 2009.

The conditions of relative and absolute poverty in the country are defined by ISTAT (and constantly updated every year) on the basis of a series of coefficients, and change according also to the number of people in the household.

In 2017, Italy approved its first-ever anti-poverty provision to ensure stable support to families in distress.

Worth between 400 euros and 530 euros per month on average per family, the measure provides a basic income to deprived households according to their own earnings.

So far, it has benefited a little more than 1 million poor households.IANS

Wildfire in US state forces evacuation of hundreds