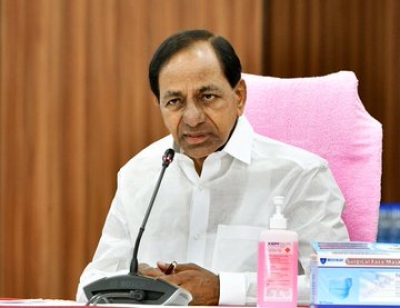 Hyderabad, Aug 6: Telangana Chief Minister K. Chandrasekhar Rao has decided to boycott NITI Aayog meeting on Sunday as a mark of protest against the Central government’s “discriminatory attitude” towards the states.

In a letter to Prime Minister Narendra Modi on Saturday, he wrote that the Centre is not treating states as equal partners in a collective effort to make India a strong and developed country.

The seventh Governing Council meeting of NITI Aayog is scheduled to be held in Delhi on Sunday.

KCR, as Rao is popularly known, wrote that India as a nation can develop only when the states develop, and strong and economically vibrant states alone can make India a strong country.

The Telangana Rashtra Samithi (TRS) chief also addressed a news conference, explaining the reasons for staying away from the meeting and launching a bitter attack on the Centre.

He alleged that because of a lack of planning and lack of cooperative federalism, the county is passing through a most difficult phase with unprecedented problems of falling rupee values, high inflation, skyrocketing prices and increasing unemployment coupled with low economic growth.

“These issues impact people’s lives and are causing a lot of concern to the nation. But these are not discussed in NITI Aayog meetings. I find the Union government a silent spectator to this emerging serious scenario, often resorting to jugglery of words playing on people’s emotions,” the CM wrote.

He also referred to the irresponsible utterances of some leaders in high positions on the use of bulldozers, encounter killings, 80:20 ratios and references with religious undertones. Noting that these were disrupting the communal harmony and social fabric of the nation, besides inviting international criticism, he found fault with the Union government for not taking any action to control the situation.

KCR also lashed out at the Centre for treating borrowings of state PSUs for their capital needs as state government borrowings. He said this had put brakes on the progress of Telangana and many other states. “This discrimination is practised against the states, without any compunction, even while the government of India resorts to indiscriminate open market borrowings,” he wrote.

Recalling that NITI Aayog was started with an objective of cooperative federalism, he said after seven years of functioning, it is now clear that this explicit objective was observed more in breach. He alleged that the federal structure of India is being systematically eroded by some deliberate actions by the Centre.

“These developments are very much discouraging to trailblazing states like Telangana. The blatant discrimination against some states even in the legitimate functions assigned to them in the Constitution leaves much to be desired.”

He cited changing the All India Services (AIS) rules to the disadvantage of states, and the inability of the Centre as an arbiter and facilitator in resolving interstate water disputes as some glaring instances of the Centre working against the spirit of cooperative federalism.

“The propensity of the Union government to levy cess as an indirect tax is depriving states of their legitimate share in tax revenues. Such unilateral and irresponsible policies of the Government of India, without taking into consideration, the state’s interests, have nudged the country away from cooperative federalism, the tenet enshrined in the Indian Constitution is deliberately disregarded, which is evident from the increasing penchant for bringing legislations unilaterally in critical areas of agriculture, electricity etc. The one-sided decision to bring the new farm laws and the so-called power sector reforms are only a few examples,” reads the letter.

KCR expressed anguish over the Centre ignoring important recommendations of NITI Aayog. He pointed out that a major recommendation of a group of Chief Ministers constituted by it was that states should be given the flexibility to design or modify the schemes based on their needs and conditions to ensure maximum benefit to the people.

He recalled that in 2016, NITI Ayog had recommended a grant of Rs 5,000 crore for Mission Kakatiya to restore minor irrigation tanks in Telangana. Another recommendation was to provide central assistance of Rs 19,205 crore for Mission Bhagiratha, a pioneering scheme in the country, which has been completed in Telangana, to provide drinking water to every household in the state.

He said the Centre not only ignored the recommendations but also did not release any money for the schemes, and slammed it for unabashedly claiming that Telangana is one of the states which provides drinking water to every household under the banner of Jal Jeevan Mission, a central scheme.