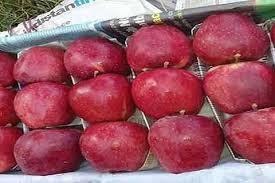 Due to what are being seen as undeclared restrictions imposed by the authorities over the movement of civilian trucks on Qazigund on NH44, the fear of incurring huge losses is becoming more palpable. As thousands of apple-laden tippers remain stranded on Jammu-Srinagar roads for over 10 days, the crisis in the apple industry in Kashmir is becoming more sporadic and widespread.

Sensing the gravity of the economic crisis befalling on the apple growers, the former chief minister of the J&K Mehbooba Mufti, visited the apple mandi in Shopian on September 27. Mehbooba stated that Kashmir has been turned into an open prison: “Lakhs of workers are associated with the apple business in the region, especially their children’s education, which is directly affected due to the crisis. Many people among them have taken loans from different mandis, if they incur losses, who is going to compensate for our workers,” she said.

On the one hand, authorities have stressed that the highway repair and the issue of shooting stones has caused such extensive delays, however, fruit growers on the other hand have blamed the double standards of the interim government, accusing authorities for punishing the Kashmiris and teaching them a lesson.

According to Bashir Ahmad Basheer, the head of the Kashmir Valley Fruit Growers and Dealers Union, as many as 8,000 trucks carrying apples worth 100 crore rupees ($12.25 million) have been stranded on the highway for the last two weeks.

“I warn the administration that if they don’t immediately open the roads for trucks, I along with our workers will sit on a protest on the national highway by blocking it,” Mehbooba added.

“We know military convoys have continued but fruit trucks that belong to civilians are being stopped. It seems such tactics are meant to punish Kashmiris.”

Meanwhile, the apple growers have demonstrated against the restrictions on their vehicles, blaming the authorities for showing indifference and attempting to crush the industry and making the independent businesses vulnerable and more dependent.

The Apple industry forms the major part of the local economy that sustains more than half of the entire population in south and north Kashmir. Many farmers told News Indian Stream that they have been facing issues due to the conflicting situation in the Kashmir region especially after the abrogation of Article 370 and 35A.

The repeated military lockdown and restrictions on civilian movement post-2019 have forced farmers to undergo structural and direct losses. Besides, the anti-people policies adopted by the authorities including the imposition on taxes and foreign imports have eroded the overall income of the industry. Transporting apples outside Kashmir in the last few years has become a nightmare for traders and farmers, the locals lament.

“The stranding of fruit-laden vehicles in the context of an extremely hard policy during the last three years and total detachment from the masses will raise questions. The onus of convincing fruit growers that nothing is deliberate lies on the government of the day,” Sajad Lone of Peoples Conference, responded. – INDIA NEWS STREAM