Security stepped up at Delhi’s Ghazipur after IED recovery 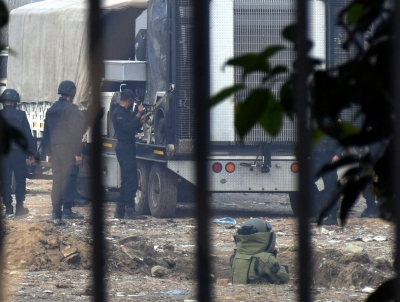 New Delhi: A day after the recovery of an Improvised Explosive Device (IED) from the national capital’s Ghazipur flower market, the police have tightened the security arrangements in and around the area, an official said here on Saturday.

The National Security Guard and the Special Cell of Delhi Police on Friday averted a major terror attack in the city by timely defusing a 3-Kg IED which was placed at a crowded market by unidentified anti-national elements.

“We have made proper deployment of the police force in the area and checking is being carried out,” Additional DCP (East district) Vineet Kumar told IANS.

He informed that the adjacent fruit and vegetable market in the area is open today as it comes under the exempted category while the Ghazipur flower market remains closed due to the COVID curbs placed by the Delhi Disaster Management Authority.

The suspicious explosives-laden bag was first sighted by a local vendor, however, he did not pay any heed to it and left. When he returned after sometime, the bag was still there after which he informed a civil defence volunteer in the area who then ultimately made a PCR call around 10.16 a.m. and the Delhi Fire Services (DFS) department was also informed at the same time.

The DFS official confirmed to IANS that they received a call around 10.20 a.m. regarding an unattended bag lying at the Ghazipur flower market in the city after which one fire engine was rushed to the spot.

With things looking very serious, the Delhi Police alerted NSG about the suspicious object around 11 a.m. which sent its bomb disposal squad. The police then cordoned off the entire area for the safety and security of the people. Then the bomb disposal squad with the help of police personnel dug an approximately eight feet ditch in an open ground where the bag carrying the IED was disposed off.

The NSG conducted a controlled explosion of the recovered IED in that ditch, saving several lives that could have ended if the bomb had not been found and defused in time. – IANS

Who’s the VIP in revelations made by director in actor Dileep case?

BJP releases first list for UP, Yogi to contest from Gorakhpur Urban