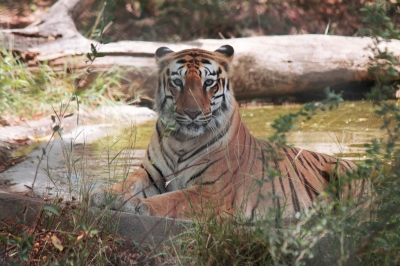 “Of the 127, Madhya Pradesh alone accounted for 42 deaths, the highest, followed by Maharashtra at 27. Apart from that, Karnataka saw 15 deaths, Uttar Pradesh nine, Assam and Kerala, six each while Bihar, Chhattisgarh, Tamil Nadu and Telangana witnessed four each deaths of the national animal. Uttarakhand saw three deaths while Andhra Pradesh, Rajasthan and West Bengal witnessed one death each of the tigers,” Minister of State for Environment, Forest and Climate Change Ashwini Kumar Choubey told Rajya Sabha in a written reply, citing figures furnished by states.

“The average lifespan of the tigers in the wild is generally 10-12 years and in natural ecosystem factors like old age, diseases, internecine fights, electrocution, snaring, drowning, road, rail hits etc. and a very high infant mortality observed in big cats, including tigers accounts for majority of tiger deaths,” he added.

The Minister also listed the steps taken by the government to prevent such deaths and about the conservation methods.

“Due to efforts of the Government of India through the National Tiger Conservation Authority, the tiger has been brought back from the brink of extinction to an assured path of recovery, which is evident in findings of the quadrennial All India Tiger Estimation conducted in 2006, 2010, 2014 and 2018.”

These results have shown a healthy annual growth rate of tigers at 6 per cent, which offsets natural losses and keeps tigers at the habitats carrying capacity level, in the Indian context, he said.

On December 30, 2021, the Ministry had issued a clarification over media reports about tiger deaths in the country, wherein it had stated that “for the period 2012 to 2021, the average tiger deaths per year in the country hovered around 98, which is balanced by the annual recruitment as highlighted by this robust growth rate”.

In addition, the National Tiger Conservation Authority has taken several steps under the ongoing Centrally Sponsored Scheme of Project Tiger to address poaching, which too, is significantly controlled as seen in the confirmed poaching and seizure cases, it said. (IANS)