China bans ‘Winnie the Pooh’ film over comparisons to Xi 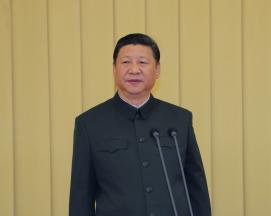 Beijing: Chinese censors have banned the release of “Christopher Robin”, a new animated film adaptation of A.A. Milnes beloved story about “Winnie the Pooh” for the character’s comparison to President Xi Jinping.

“Winnie the Pooh” has become a lighthearted way for people across China to mock their President, the Guardian reported on Tuesday.

It started when Xi visited the US in 2013 and an image of him and his former American counterpart Barack Obama walking together spurred comparisons to Winnie, a portly Xi, walking with Tigger, a lanky Obama.

Xi was again compared to the fictional bear in 2014 during a meeting with Japanese Prime Minister Shinzo Abe, who took on the part of the pessimistic, gloomy donkey, Eeyore.

The HBO website owas blocked last month after comedian John Oliver repeatedly made fun of the Chinese President’s apparent sensitivity over comparisons of his figure with that of Winnie.

Another comparison between Xi and Winnie during a military parade in 2015 became that year’s most censored image, according to Global Risk Insights.

The analysis firm said the Chinese government viewed the meme as “a serious effort to undermine the dignity of the presidential office and Xi himself”.

“Christopher Robin” is the second Disney film to be denied a release in China this year, after “A Wrinkle in Time” was blocked. (IANS)

Sambhal (Uttar Pradesh):  The Sambhal police escorted a wedding procession of Ram Kishan, a Dalit, who was riding a horse. The bride, Ravina, 21, had expressed a desire to...

Toqayev sworn in as Kazakh President

Astana:  Qasym-Jomart Toqayev has been sworn in as the Kazakh leader. After taking an oath at an inauguration ceremony held in the capital city of Astana, Toqayev on Saturday said...