We want to establish India as big market for film production: Thakur 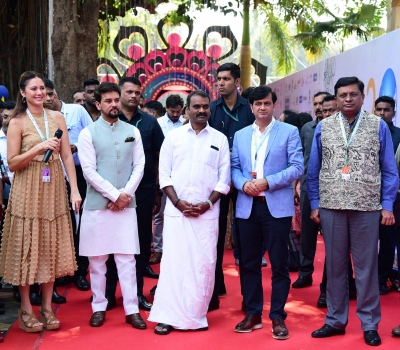 Panaji: Union Minister for Information and Broadcasting Anurag Thakur on Sunday said that the government intends to make India as a destination for film shooting and production.

“We have seen the pandemic time and coming out of that, now large numbers are witnessing IFFI. Through this, regional cinemas are going internationally,” he told reporters ahead of the opening ceremony of International Film Festival of India (IFFI).

While welcoming all the delegates and filmmakers, Thakur said that India has got an opportunity to bring global films here and give new hope to regional films.

“We got an opportunity to bring global films to IFFI. The Film Bazaar in IFFI is superb. It is international standard and international films are brought here, even regional films of India are taken to international level through IFFI. Indian art and culture will be taken globally by this way,” he said.

“We want to establish India as a big market for production, collaboration, post production and film shooting. I am happy that people from across the world are showing their interest,” he said.

The nine-day gala, featuring 280 films from 79 countries and many more activities, is opening with the Austrian film ‘Alma and Oskar’, directed by Dieter Berner, while Krzyszt of Zanussi’s ‘Perfect Number’ is the closing film.

France is the ‘Spotlight’ country and eight films will be screened under the ‘Country Focus’ package. More than 6,000 delegates are participating in the IFFI.

Chennai:  Veteran choreographer and stunt master, 'Judo' Rathnam, who holds the Guinness World Record for the most number of films as a stunt choreographer, passed away in Chennai on Thursday....