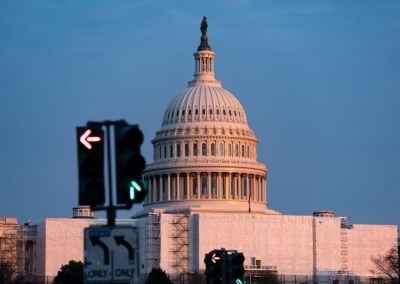 Washington: The US House of Representatives has adjourned after its members failed to elect a speaker for the lower chamber, leading to a historic political stalemate.

Republican Congressman from California, Kevin McCarthy failed to secure enough votes in three ballots earlier on Tuesday after a group of House Republicans voted against him, reports Xinhua news agency.

There will be at least a fourth vote as House members agreed to adjourn until Wednesday noon.

McCarthy had reportedly negotiated with fellow Republicans on Tuesday night.

The political drama came nearly two months after the November 8, 2022 midterm elections, in which Republicans flipped the House and Democrats held onto their majority in the Senate.

This was the first time in a century that the US House speaker was not elected on the first ballot.

The House will have to vote on and on until a speaker is elected with a majority of votes.

A candidate needs 218 votes to become speaker if no lawmaker skips the vote or votes “present”.

All House Democrats voted for Congressman Hakeem Jeffries from New York to lead the party minority in the three rounds of voting on the speakership.

It also followed the convening of the new and divided Congress on Tuesday noon.

Jemele Hill, a contributing writer for The Atlantic, tweeted on Tuesday afternoon that “what we’re witnessing today in American politics is just another brutal indictment of this dysfunctional political system”.

White House press secretary Karine Jean-Pierre told reporters that President Joe Biden, a former six-term senator from Delaware, “will not insert himself in that process”.

“The president served as a US senator for 34 years and he understands how this process works,” Jean-Pierre said.

Vice President Kamala Harris presided over the opening day of the Senate — where Democrats have a slim 51-49 majority over Republicans — when she swore in 35 either newly elected or re-elected senators on Tuesday afternoon.

Congressman-elect George Santos, a 34-year-old Republican from New York, is among those who are waiting to be sworn in after the speaker vote.

Santos had recently admitted to lying about his educational history and professional biography but rejected bipartisan calls for him not to take office.

“My sins here are embellishing my resume. I’m sorry,” embattled Santos acknowledged last week while alleging that the controversy would not deter him “from having good legislative success.”

Public trust in Congress reached an all-time low, with only 7 per cent of Americans expressing “a great deal” or “quite a lot” of confidence in it, according to a Gallup poll released in the summer of 2022.

The divided Congress with Republicans controlling the House is likely to stall Biden’s legislative agenda in the next two years.

In addition, top House Republicans have vowed to launch a series of investigations into the Democratic administration, poised to augment partisan discord on Capitol Hill.
IANS

Why Jains are protesting from Jharkhand to Gujarat?