Wild bee larvae, a food delicacy, is disappearing from Tangkhul kitchen as forests go on depleting 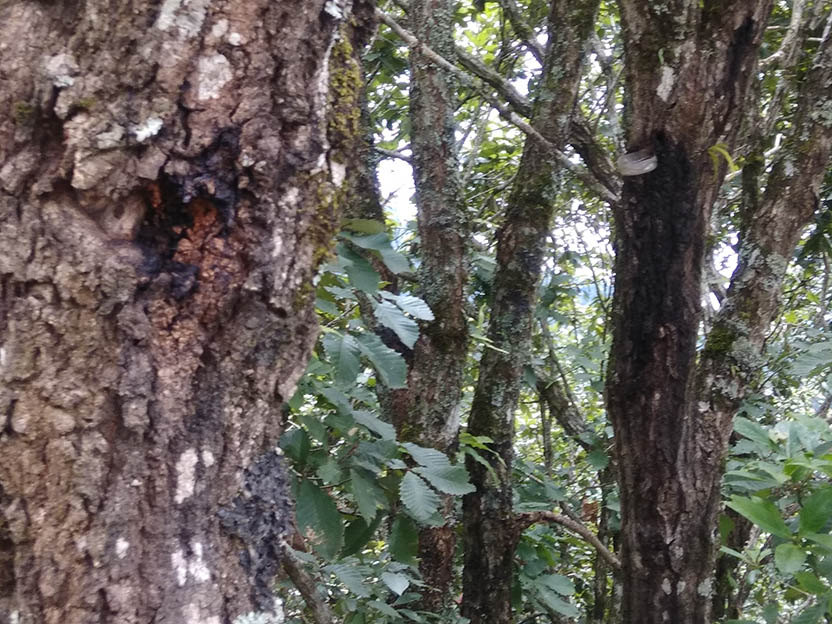 Ukhrul(Manipur) The Tangkhul community has a traditional practice of rearing wild bees (apiculture) both for honey collection and for consuming the bee larvae since time immemorial.

Wild bee larvae, which is considered as one of the most favourite food items in the Tangkhul kitchen because of its special taste, is disappearing from these kitchens as the wild bees population goes depleting along with depletion of forest .

Many may balk at this but to the people of Ukhrul district (As with probably all the tribals of Manipur and the North East in India), proteinous bee larvae is today a menu on the rich man’s table with each piece costing at least Rs 20-30 in local market.No wonder the people of Ukhrul have a very good knowledge of apiculture and the bee is basically reared for two types, honey and consumption of larvae.

Wild bees reared for honey in Tangkhul dialect are Kaha, Shileng and Mikza etc (wild bees found in forest are Rock Bee/Apis dorsata and Dwarf Honey Bee/Apis florea).Other wild bees/hornets reared for larvae which is a delicacy for many Tangkhuls is the Asian Giant Hornet (Vespa mandarinia) popularly known as Killer Hornet.

Narrating the Tangkhul traditional art of wild bee trapping and rearing style, one of the local bee farmers of Ukhrul, G. Kaping, aged about 55 years  said trapping of honey bees is very simple, but  the killer hornet reared for larvae consumption need specific skill and know how technique.

The rearing stage starts around April-May with the Queen hornet and a few bee workers came out search of oak tree sap/juice for food or feed the killer hornet with meat to strike up familiarity, then tie a white material called “Kongrahar” on the thorax part to spot the nest.

When the bee leaves, the Kongrahar is clearly visible to the bee hunter and this help them to locate the bee nest and is best past time hobbies for many persons.

The larvae of the wild giant bee/ killer hornet called “Khuirei” in Tangkhul dialect is in high demand at the local market because of their exceptional taste and is a prized delicacy and one nest will cost amounting to Rs 30000-50000.

Choosing the site and placing of the nest in a right place is very important while in rearing hornet.

The original nest have to be attached to a log of wood about man’s arm size along with two more logs of the same size have place on both sides to prevent collapse , when the nest becomes heavy.Proper drainage around the nest to prevent water seep into the nest during rainy season.

The workers which are females but cannot lay eggs work endlessly and tirelessly for building their nest and protecting the particular territory from invasion.The best time for harvest is October to November, one will see beehive put for sale in the local shops of Ukhrul town.

Indiscriminate forest exploitation and use of chemical substances to increase crop yield or to protect crops from pest has directly affected the population of wild bees in Ukhrul forest.

The uncontrolled felling of oak trees for fire wood and for other purpose in the last 5-10 years has depleted the number of oak trees robbing the bees of their sap as food supplement. Apart from deforestation, forest fire is another reason in the decrease of wild bee population in the forest.

The young adult hornet which usually hatch during the last week of November or December becomes the drone bee and will hibernate the whole winter season.

Later in the next spring season (April & May), the queen bee comes out and starts to make nest/beehive to continue their life cycle again. However the indiscriminate forest fire kills many bees during their hibernation time.

A local bee farmers Rinmaya from Ukhrul said he has hardly seen swarming of wild bees during trapping season (April and May) for the last 4-5 years in the forest.

He said  that after many farmers started using chemical substances such as pesticide and weedicide to kill pests or insects of crop, honey bees’ visit to flowers has subsequently decreased.

Rinmaya who has observed the relationship between the plants and the wild bees said that pesticides might have fallen on flowers and plants which are collected along with the pollen and nectars by the bees resulting in their deaths.

Pesticides also reach surface water from treated plants and soil. Due to their rampant use, there is a high possibility of widespread contamination of water that flows from upper slope into the stream running across the villages and even endangering the other animals.

There has been report of water buffaloes found dead while grazing. Though no specific reasons could be ascertained as yet, the villagers suspect that the animals might have drunk the contaminated water.

Beside indiscriminate use of chemical substances, the Killer Hornet is also a major threat to agriculture as they target bees. The dwindling bee population which is already at risk helps in pollination, an extremely crucial process.

The number of wild bees, particularly honey bees, which visit flowering plants to collect nectar and pollen is also decreasing with each passing year. The nectar and pollen from the flowers are the main source of food which help the queen bee to lay eggs and at the same enhance the process of plant pollination.

If symbiotic inter-relationship between the bees and plants is further disturbed it will ultimately impact on the survival of other organisms in the forest.This might have severe consequences for ecological imbalances thereby abrupt destruction to the forest biodiversity.

Manifestations of Covid go beyond lungs, affect all organs: Experts at AIIMS