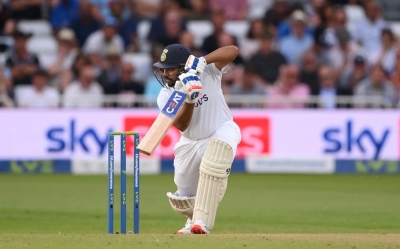 Leicester, June 26 (IANS) India’s preparations for the re-scheduled fifth Test against England at Edgbaston, Birmingham from July 1 have suffered a setback as captain Rohit Sharma has tested positive for Covid-19.

The BCCI confirmed early on Sunday morning that Rohit Sharma had tested positive via a Rapid Antigen Test (RAT) on Saturday, with the India skipper currently in isolation at the team hotel ahead of the Test.

Rohit had been participating in India’s warm-up match against a Leicestershire XI at Uptonsteel County Ground, with the 35-year-old having made 25 in the opening innings of the match on Thursday.

However Rohit did not feature during India’s second innings on Saturday, with the BCCI confirming the right-hander will undergo further tests on Sunday to determine the extent of his ailment.

In an update on Sunday morning, BCCI tweeted, “#TeamIndia Captain Mr Rohit Sharma has tested positive for COVID-19 following a Rapid Antigen Test (RAT) conducted on Saturday. He is currently in isolation at the team hotel and is under the care of the BCCI Medical Team.”

The game in Edgbaston is the fifth and final Test of the series that commenced last year but had to be postponed following a Covid outbreak in the India camp.

India currently lead the series 2-1 and can claim their first Test series victory on England soil since 2007 by avoiding defeat in Birmingham.

If Rohit does recover in time to lead India during the match it will be his first Test in charge away from home after he took over the captaincy from Virat Kohli earlier this year. Rohit had missed the away Test series in South Africa due to injury.

A Test victory for India will also provide them with valuable points on the World Test Championship standings, with Rohit’s side currently occupying third place on the standings behind Australia and South Africa. – IANS