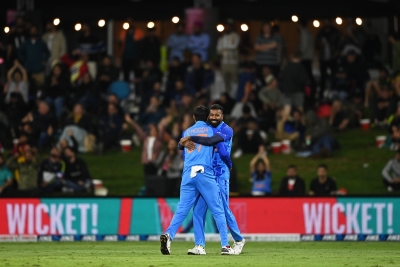 Mount Maunganui,: All-rounder Deepak Hooda took four wickets, including three in the final over, while Yuzvendra Chahal and Mohammed Siraj starred with two wickets each as India beat New Zealand by 65 runs to win the second T20I at Bay Oval in Mount Maunganui on Sunday.

After Suryakumar Yadav, the top-ranked T20I batter, hit 11 fours and seven sixes all over the park at a strike-rate of 217.65 to be unbeaten on 111 off 51 balls, his second T20I century and propel India to a challenging 191/6, New Zealand just never got going with the chase and were bowled out for 126 in 18.5 overs.

India struck on just the second ball of defending 191 as Bhuvneshwar Kumar enticed Finn Allen to go for a drive and edge flew to running third man. Devon Conway and Kane Williamson hit six boundaries, including taking 17 runs off Washington Sundar’s first over of the match.

But India bounced back as Conway mistimed a sweep to deep backward square leg off Sundar in the ninth over. Glenn Phillips hammered a four and six, but was clean bowled by Yuzvendra Chahal while going for a slog-sweep.

The scoreboard pressure then led to Daryl Mitchell and James Neesham holing out to long-on in quick succession. Williamson held one end but was in a painful struggle at the crease, unable to get the big hits and forced to go slow against the spinners.

As Mohammed Siraj caught a leading edge from Mitchell Santner’s bat in his follow-through, the result was a foregone conclusion. Though Williamson got his fifty with a pulled six over deep backward square leg and then punched beautifully between mid-off and extra cover for four more off Siraj, it was too little too late for New Zealand.

Williamson’s scratchy stay came to an end when an under-edge on a swipe across the line crashed into the stumps off Siraj in the 18th over. Deepak Hooda took the last three wickets in four balls to get a convincing win for India.

New Delhi: With India participating and organizing several sports events every year, the country has become part of a select group having their anti-doping law, Sujata Chaturvedi, Secretary of Sports,...

Qatar: Iran goals at the 98th minute of the game. First Cheshmi blown out Wales with a hammering goal and then Ramin hit the goal in the 100th minute of...

Auckland: Tom Latham reiterated on Friday why he's an ever-dependable middle-order batter for New Zealand by striking his seventh ODI hundred to seal a seven-wicket victory over India in the first...

Neymar to play on at World Cup despite injury: Brazil coach Tite

Lusail (Qatar): Brazil manager Tite said star forward Neymar would fight through the pain barrier to continue playing in the FIFA World Cup despite an ankle injury. The 30-year-old suffered the...

Melbourne: Cricket Australia (CA) is reportedly seeking an undertaking from broadcaster Channel 7 to ensure former head coach Justin Langer, who supposedly has a sour relationship with some seniors in the...

Auckland: With the international cricket schedule having one ICC event in almost every year, there is less time for the teams to brush off the mistakes from the past events and...

Jerusalem: India will face Uzbekistan, while China will play Spain in the semifinals of the 2022 Men's World Team Chess Championship in Jerusalem later on Thursday. India and France beat each...

New Delhi: Leading multiplex chain INOX Leisure Ltd. announced on Wednesday that it is all set to live screen matches from FIFA World Cup Qatar 2022 across its 22 multiplexes in...

Gangtok (Sikkim): Sikkim is set to host its first ever Ranji Trophy match this December after receiving the go-ahead from the BCCI. The Sikkim Cricket Association (SICA), in a press statement,...

Doha (Qatar), Nov 22 (IANS) The 2022 FIFA World Cup is billed as Lionel Messi's last one and arguably his best shot to win the one trophy missing from his...