Civilian injured during crossfire between army, militants in Assam 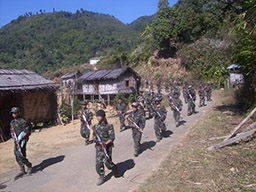 Guwahati : A civilian was injured during a crossfire between the army and militants in Assam’s Tinsukia district, a defence official said here on Wednesday.

According to Army PRO in Guwahati Lt. Col. Mahendra Rawat, a search operation was conducted in the Pengri area on Tuesday night and four linkmen of a militant group were apprehended.

After questioning the four, the army and local police launched another search operation in the upper Dihing reserve forest, about 6 km southwest of Pengri, on Wednesday morning.

“The security personnel came under fire from militants during the search operation, and in a swift retaliation by the security forces, the militants were pushed back,” Rawat said.

The militants are suspected to be cadres of the defunct United Liberation Front of Asom-Independent (ULFA-I).

The operation is currently underway.