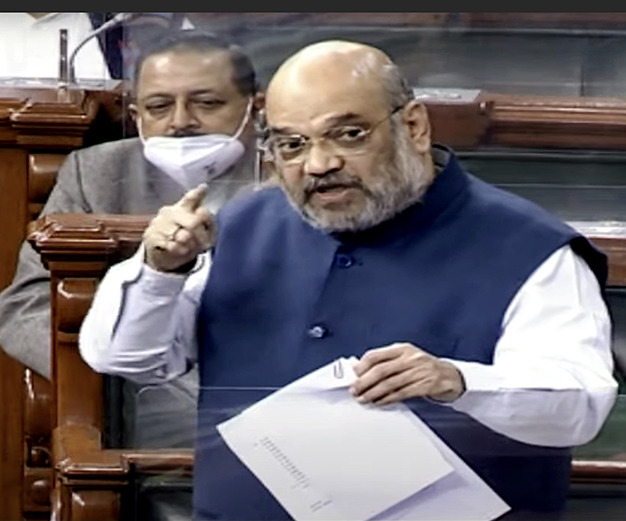 Shah announced the long awaited decision in three separate tweets when most of the political parties and NGOs have been demanding to repeal the AFSPA.

The demand intensified after the security forces killed 14 people and injured 30 others in Mon district of Nagaland in December last year.

Almost all Chief Ministers of the northeastern states welcomed the Central government’s announcement to reduce the disturbed areas under the AFSPA.

Taking to Twitter, Shah announced: “In a significant step, GoI under the decisive leadership of PM Narendra Modi has decided to reduce disturbed areas under Armed Forces Special Powers Act (AFSPA) in the states of Nagaland, Assam and Manipur after decades.”

“Reduction in areas under AFSPA is a result of the improved security situation and fast-tracked development due to the consistent efforts and several agreements to end insurgency and bring lasting peace in the northeast by PM Narendra Modi government,” he said.

In another tweet, the Home Minister said: “Thanks to PM Narendra Modi’s unwavering commitment, our northeastern region, which was neglected for decades is now witnessing a new era of peace, prosperity and unprecedented development. I congratulate the people of the northeast on this momentous occasion.”

According to the officials in the three northeastern states, in Nagaland, the AFSPA would be removed from the jurisdiction of 15 police stations in seven districts.

After the Central government’s latest decision, in Manipur, 15 police station areas of six districts would be excluded from the Disturbed Area Act while in Assam, the AFSPA would be removed completely from 23 districts and it would remain enforced partially in one district.

The fresh decision on the AFSPA will be effective from April 1.

An official statement said that the Prime Minister is committed to make the entire northeastern region free from extremism.

“The Central government has been interacting with the state governments and other stakeholders from time to time. Due to the improvement in the security situation under the government led by Prime Minister Narendra Modi, the Disturbed Area Notification under AFSPA was completely removed from Tripura in 2015 and Meghalaya in 2018,” the statement said.

This has been gradually reduced and the Disturbed Areas Notification, is currently applicable in only three districts and in two police station areas in one other district of Arunachal Pradesh.

The Disturbed Area Notification is in force in the whole of Nagaland from 1995.

The Central government has accepted the recommendation of a committee constituted in this context for withdrawal of AFSPA in a phased manner, the statement said.

The AFSPA, which allows the Army and other central para-military forces to conduct raids, operations, arrest anyone anywhere without prior notice or arrest warrant, is in force in Nagaland, Assam, Manipur barring the Imphal municipal council area and certain districts of Arunachal Pradesh.

The special law first came into force in 1958 to deal with the uprising in the Naga Hills, followed by insurgency in Assam.Tripura is the only state in the northeastern region where AFSPA was withdrawn in May 2015 by the then Left Front government led by Chief Minister Manik Sarkar after terror activities were tamed.

The AFSPA was also lifted from the bordering areas of Meghalaya in 2018.The Union Home Ministry from time to time, reviewing the security situation, extends the period of AFSPA from six months to one year.

The Nagaland Assembly, in a special session in December last year, unanimously passed a resolution demanding the Centre to repeal the AFSPA from the entire northeast, and specifically from Nagaland, so as to strengthen the ongoing efforts to find a peaceful political settlement to the Naga political issue. – IANS

Nushrratt on shooting for ‘Selfiee’: Gonna be one mad fun ride

Sanctions against Russia could undermine global dominance of US dollar: IMF