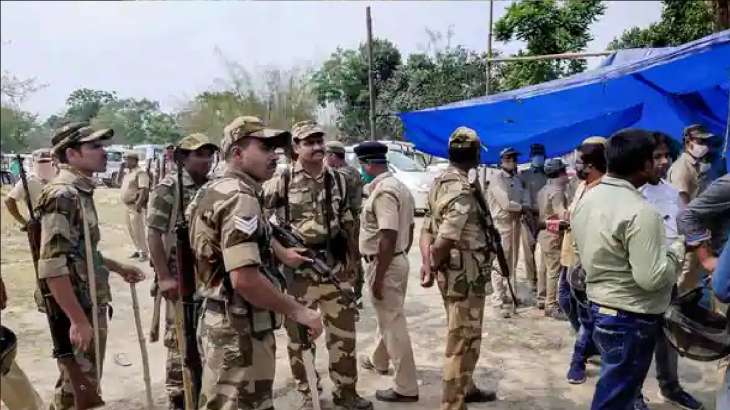 Security officials at the scene.

In a bizarre incident, two paramilitary personnel were shot dead and two others were injured by one of their colleagues in the Porbandar district of Gujarat. The men were not on active duty when they got into a fight in the evening that escalated and shots were fired from an AK-47 rifle. They were part of an India Reserve Battalion (IRB) from Manipur and deputed in Gujarat besides the Central Armed Police Forces (CAPF), said Porbandar Collector and District Election Officer AM Sharma, reported NDTV. Authorities are investigating the possible motive that led to the fatal incident.

Men were not on active duty: District collector

While sharing details of the incident, Porbandar Collector AM Sharma said the escalated fight took place on Saturday evening. “Shots were fired using an AK-47 rifle,” Sharma reportedly said. He said: “The battalion is from Manipur and has been deputed here beside the Central Armed Police Forces (CAPF).”

Injured being treated at Jamnagar

As per details, one injured paramilitary personnel has been shot in the stomach and another in the leg. For advanced treatment, the duo has been shifted to Jamnagar, nearly 150km away from Porbandar. At the time of the incident, the battalion was inside a cyclone center in Tukda Gosa village, nearly 25km from the Porbandar district headquarters.

Victims and accused belonged to Manipur

The paramilitary trooper, who is accused of killing his two colleagues and injuring two others, has been identified by police as Constable S Inauchashingh. Meanwhile, the two men killed were identified as Thoiba Singh and Jitendra Singh. The injured persons have been identified as constables Chorajit and Rohikana. As per the police, all of them belong to the northeastern state of Manipur.