Fadnavis not the first, may not be the last regional satrap of BJP to find his wings clipped 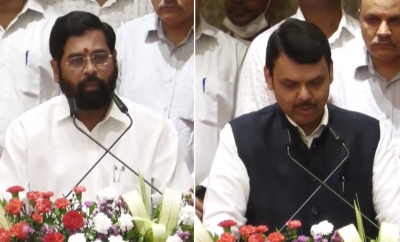 Former Maharashtra chief minister Devendra Fadnavis is neither the first, nor the last regional satrap of the Bharatiya Janata Party who suddenly found his stature cut to size. Till the afternoon of June 30 he was, in a way, boasting himself as the kingmaker of the state. Then everything went upside down for him.

Soon after he went on record to say that his party would be leading support from outside to the breakaway Shiv Sena faction led by Eknath Shinde, he was asked by the top echelon of the party to take oath as the deputy chief minister of the state. A crestfallen Fadnavis had to submit, though it was on this very point that he broke his relationship with Uddhav Thackeray in November 2019.

Just a few months back Nitin Patel, the then deputy chief minister of Gujarat, not only missed the bus once again, but found himself dropped from the new state cabinet like a hot potato. This seasoned Patel leader from the state of PM Narendra Modi and home minister Amit Shah had since long been nursing the hope to become the chief minister. But the first time Anandiben Patel (after Modi became the PM) and second time Vijay Rupani emerged luckier. When the third time on September 13 last year Bhupendra Patel, a first time MLA, was handpicked by the top leadership, he almost broke down. As if that was not enough, he was not taken into the new cabinet, which has the rare distinction of having nine first time MLAs as ministers. Not only that just three out of 25 ministers, including CM, have previous experience of being a minister. All this had happened when Gujarat is going for election in December 2022.

Curiously, his ouster came just a few days after he, in a lighter vein,
asked as to who will throw him out.

Former deputy chief minister of Bihar Sushil Kumar Modi and two of his very senior ministerial colleagues Nand Kishore Yadav and Prem Kumar were similarly shocked after the November 2020 Assembly election of Bihar when an order from above came stating that they are not going to be inducted into the new Nitish Kumar cabinet. The news stupefied Prem Kumar, in particular, as the media was till then circulating stories that he is likely to be elevated to the status of the second deputy chief minister of Bihar as he is MLA from Gaya since 1990.

While Sushil Modi was later accommodated to Rajya Sabha Nand Kishore and Prem have faded into oblivion.

Once again on the eve of July 7 last cabinet expansion of the Narendra Modi government various newspapers and television channels carried the news that Sushil Modi is likely to get ministerial berth, possibly in the finance ministry. This was because he had served as the deputy CM-cum-finance minister of Bihar for at least 10 years. Not only he failed to find place, two other party stalwarts Prakash Javadekar from Maharashtra and Ravi Shankar Prasad from Bihar suddenly found themselves out of the cabinet. Even hours before they were not aware that they would be left in cold in such a manner. Mukhtar Abbas Naqvi, another Union minister, is keeping his fingers crossed as he has not been sent to the Rajya Sabha this time. His fate hangs in balance.

Soon after the last year massive reshuffle of Modi cabinet came the news of removal of Karnataka chief minister B S Yediyurappa, once called Narendra Modi of South India. What came as a surprise was the elevation of Basavaraj Bommai, relatively a lightweight in the state BJP who was till a few years
back in the Janata Dal.

Dropping of ministers and reshuffle of portfolios are not a new phenomenon. But the manner in which senior BJP ministers and leaders are suddenly finding their wings clipped is something very new. The case of former Assam chief minister, Sarbanand Sonowal might not be so surprising. The first tribal chief minister of the largest north-eastern state was not the one who took oath on May 10, 2021 after his party won the election. Instead it was his deputy, Himanta Biswa Sarma, who took over as the chief minister on that day. This was somewhat expected as the party had given enough hint about this change during the campaign. Sonowal, however, was not so unlucky. On July 7 he was once again inducted into the Narendra Modi cabinet.

The BJP’s decision to make Pushkar Singh Dhami as the chief minister of Uttarakhand came as a complete surprise as he was the third chief minister in four months to take over and that too when the state was going to have election in February 2022. That was not all. Dhami, who was the first time MLA, was once again preferred over other senior leaders after he lost from his own Assembly constituency this time. He finally entered the House by winning a by-election.

Fadnavis should consider himself as a bit lucky as he was asked to take oath as the deputy chief minister. Syed Shahnawaz Husain, a cabinet rank minister in the Atal Bihari Vajpayee ministry two decades back, was
politically a homeless wanderer till he was made MLC of the BJP in Bihar last year. Then he got a green signal to become Industry Minister in the Nitish Kumar cabinet.

But one man who stood powerful and is still surviving is the Uttar Pradesh chief minister, Yogi Adityanath. After the havoc wreaked by second wave of corona virus the BJP top leadership was thinking in terms of getting rid of him. The humiliating defeat the party suffered in West Bengal had badly shaken the party bigwigs to the core. But the RSS reportedly stood behind Yogi in whom it sees a future prospect for the BJP. As he is two decades junior to Modi and a very strong votary of Hindutva, the Sangh does not want to antagonize him. He is the only chief minister of the BJP who is pressed into service in the Assembly polls in rest of the states. One needs to be reminded that in 2017 Yogi was not the first choice to the post of the chief minister. Media reports then suggested that the then Union minister of state for railways, Manoj Sinha, was likely to take over as the chief minister after the party’s historic victory.

But Yogi almost fought out to emerge as victorious. Finally, he became the first chief minister of the BJP in UP to complete one full term. – INDIA NEWS STREAM