China’s Salami Slicing Guided Its Expansionism Even During the Pandemic 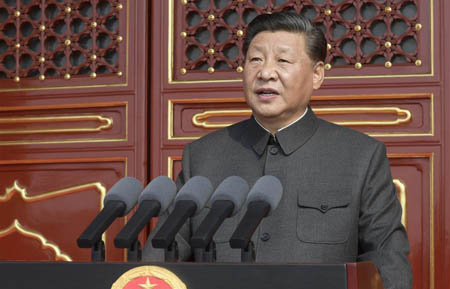 The Covid-19 pandemic is not yet over, but the world seems to have come to terms with how to deal with it. But this more than two-year long menace on the world could not deter China- the originator of the virus, from pursing its expansionist initiatives, in and around its neighborhood.

China had been busy with other plans, when as many as 197 countries in the world grappled with the deadly virus, while reporting millions of deaths. Badly hit nations tried to contain the virus trying to learn from one another, while Beijing continued to do what it does best- and that is encroaching on land territories of other sovereign nations, under what is called its ‘Salami Slicing’ policy.

The Chinese strategy of ‘Salami Slicing’ is considered an old tactic of Beijing , where they expand territory using everything at their disposal, Covid19 perhaps provided them a power vacuum, created in some areas and countries by economic downturns and limitations of movement. History educates us about Chinese expansionist mindset, that they expand usually after a huge crisis , such as after the Vietnam war, after withdrawal of the US forces from Philippines when they expanded their territory in South China Sea.

Shrikanth Kondapalli, Professor of Chinese Studies at the Delhi-based Jawaharlal Nehru University says, “Chinese expansionism was always there, the pandemic has acted as an instrument. In October 2017 this was concerted and decided in the Chinese Communist Party’s meet of the National Congress that China wants to be a global power and acquire centre stage, a leader whom everyone would follow. The Party Congress gave directions and Covid19 only added to the early control as the world was busy with the pandemic so China got busy with fulfilling its goals of 2017.”

Border incursions at the Indo-China Line of Actual Control (LAC) have been routine, but the Chinese build-up at the Galwan Valley in eastern Ladakh in the months of March-April 2020, led to a prolonged standoff between the two Asian giants, leading to 14 inconclusive rounds of border talks between military Generals of both sides. Things got ugly on June 15th, 2020 in which Indian and Chinese troops got into the deadliest border clash since 1975, killing 20 Indian soldiers in the bloodshed.

Prime Minister Narendra Modi, addressed Indian soldiers at the Indo-China border in Ladakh, soon after this incident and reiterated, “The age of expansionism is over. The world has moved on the path of development. The expansionist forces have ruined the world in the last century. But they have either been defeated or forgotten in history”, to which Beijing responded by saying, “It’s groundless to view China as “expansionist”, exaggerate and fabricate its disputes with neighbours.”

The Indian External Affairs Ministry statement talked about complete disengagement of the troops along the LAC and de-escalation from India-China border areas for full restoration of peace and tranquillity.

New Delhi, which usually maintains silence in internal matters of other nations, in keeping with its neutrality and non-aligned position, commented for the first time on the Hongkong issue. It may be noted that New Delhi chose to remain silent on Hongkong during its year-long protests, while China raised the abrogation of Kashmir’s special status at the UN at the behest of Pakistan, three times in the same year.

According to former Indian Ambassador to Japan Sujan R. Chinoy, the border row between India and China could not have erupted at a worse moment, when the world was grappling with a once-in-a-century coronavirus pandemic and a global recession that promised to leave none unscathed.
One of India’s leading Strategic thinkers and author Brahma Chellaney writes, “China’s strategy after its disastrous 1979 invasion of Vietnam has been to win without fighting. Deception, concealment and surprise have driven China’s repeated use of force — from seizing the Johnson Reef in 1988 and the Mischief Reef in 1995 to occupying the Scarborough Shoal in 2012 and now vantage locations in Ladakh. It has changed the South China Sea’s geopolitical map without firing a shot or incurring any international costs.”

Nibbling away territory, Beijing has been notorious in its neighbourhood right from the beginning and the pandemic provided it a cover and a thrust to carry out its expansionist pursuits.

Here we examine how China has behaved with neighbouring countries ever since the pandemic began.

1. USA – Two US naval aircraft carriers – USS Nimitz and USS Ronald Reagan were deployed in the South China Sea from May 2020 and were seen conducting exercises and dual-carrier operations to support a “free and open Indo-Pacific. Beijing reportedly was annoyed and warned Washington of any misadventure. Global trade worth an estimated 3.37 trillion US dollars passes through the South China Sea annually, which accounts for a third of the global maritime trade. Approximately 39.5 percent of the total trade of China and its 80 percent of energy imports passes through the South China Sea.

2. Japan – In May 2020, Tokyo protested after a Chinese Coast Guard vessel harassed a Japanese fishing boat around the Senkaku Islands in the East China Sea. Japan is trying to promote maritime security cooperation with a lot of like-minded neighbouring countries, in a bid to curtail China’s maritime footprint. The Japan-US alliance is vital for maritime peace in the region. Japan is also arming its helicopter carrier-JS Izumo, with F-35B Lightning-II stealth fighter jets, for future deployments.

3. Vietnam-In June 2020, a Chinese survey ship was seen sailing in Vietnam’s exclusive economic zone (EEZ),, which was objected to by Vietnam. Vietnam and China have mostly been seen locked in a tiff over the South China Sea. Vietnam’s Foreign Ministry has resented to Beijing’s laying of undersea telecommunication cables on the disputed Paracel Islands. Also in April 2020 China sunk a Vietnamese fishing boat near the Paracel Islands.

4. Indonesia- Usually China and Indonesia have no dispute. But in 2020 China forced Indonesia into accepting the Nine-dash-line claim, in protest of which Jakarta wrote a letter to the UN Secretary General complaining that this was in violation of international law including UNCLOS 1982.Nine-dash-line is Chinese claim in the South China Sea which includes almost the entire area.

5. Malaysia – During 2019-20, China has been reportedly targeting drilling operations and harassing the operatives of the Malaysian oil exploration ships who were carrying out these drills, with security being provided by Malaysian Naval and Coast Guard ships within Malaysia’s maritime EEZ.

6. Australia- At the World Health Assembly Australia was among the first countries which took the lead demanding an independent, impartial, comprehensive investigation into the origins of the Wuhan virus, which was supported by 120 countries including India. Soon after this apparently China announced a beef import ban from Australia followed by a cyber-attack as was alleged that it was launched by China, Beijing however denied it.

7. Taiwan- China has often staked claim over the independent island nation Taiwan, which does not have a seat in the World Health Organisation (WHO). Taiwan says it sent an email warning to the WHO on December 31, 2019 about a pneumonia-like disease emerging from Wuhan, which was brushed under the carpet by the WHO. Later Taiwan demanded to be a part of the World Health Assembly, a move that was blocked by Beijing. These bold moves by Taiwan were not seen very kindly by China and Beijing sent bombers into Taiwanese airspace six times in a week and eight times in a month, as claimed by Taipei. China dislikes other countries for supporting Taipei and has often been vocal about its displeasure.

9. UK, France, Canada- Coercive diplomacy was seen being practiced by Chinese Ambassadors to UK, France and Canada , when these nations rejected Huawei’s 5G technology trials in their respective countries.

10. Bhutan – Usually a peaceful hill nation, Bhutan was also caught in the crosshairs of China’s neighbourhood expansionism and its dirty ‘Salami slicing’ policy after Beijing claimed the Bhutanese Sakteng Wildlife Sanctuary as its own territory, in 2020, when the pandemic began.

11. Nepal- China and Nepal have had disputes over the world’s highest mountain peak-Mount Everest , which is in Nepal, but in 2020, China staked claim to the 8,848 meters high mountain peak.

12.Singapore – Singapore, which is mostly seen as a peaceful country, ran into trouble with Beijing some years back when nine of its Infantry Carrier Vehicles were seized by Hongkong customs while coming back from Taiwan after a training exercise between Taiwan and Singapore. China warned Singapore of adhering to One-China policy and avoid having any military relations with Taiwan.

13. Philippines – In 2020, a Facebook location tag allegedly described the Philippines as a “Province of China”, thereby annoying Philippine Senators and forcing them to react sharply.

Indian Army’s Lt-Gen Vinod Bhatia (retd) says, “China has exploited the pandemic in that when most nations were busy combating Covid-19, China took this as an opportunity and practiced its tried and tested strategy of military coercion. An expansionist China demonstrated a military aggressive behaviour not only along the India-China border but also in South China Sea, East Sea, Taiwan, Malaysia, Indonesia, Philippines, Vietnam and even with Bhutan laying claims to parts of Eastern Bhutan which was a settled issue.” – INDIA NEWS STREAM

Mission Olympic Cell approves funding for Bajrang Punia’s training in US; TOPS cyclists to get faster T20 bikes for preparation of CWG