The Issues PM Skipped in His Independence Day Address 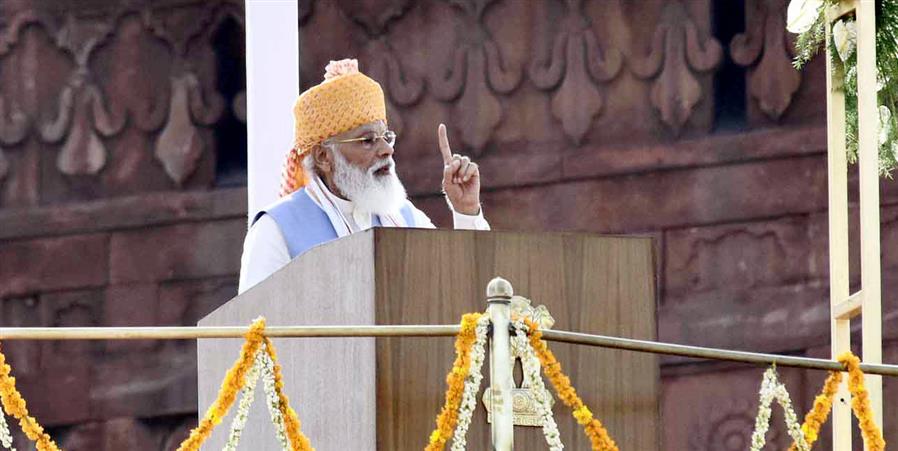 I was, and many more concerned citizens of the country must have been, reminded of this couplet after listening to Prime Minister Narendra Modi’s Independence Day speech as we were all expecting something more from him in the prevailing situation.

Speaking from the ramparts of the historic Red Fort, Modi promised a great future for India in the next 25 years – between the 75th and the 100th Independence Day – which he has christened as the ‘Amrit Kaal’ (Elixir Period) for the country.

Modi spoke of a time after 25 years when there will be no division between the urban and the rural India, when we will have world class infrastructure, cutting-edge technology and there will be no “undue interference of the government” in the lives of the people.

“…When we will be second to none in the world,” he gushed forth painting a rosy picture of the future.

“Iske liye hamein parishram aur parakram ki parkashtha ko chhoona hoga (For this, we have to achieve the pinnacle of hard endeavour and courage),” he pronounced.

He also announced an ambitious Rs 100 lakh crore infrastructure plan that would generate jobs and boost economy of the country.

However, there was no mention of some of the burning issues being faced by the country in his eighth address to the nation from the Red Fort. There were no answers to the questions lurking in the minds of concerned citizenry of the country.

Most significantly, he did not choose to offer his personal views – his ‘Mann ki Baat’ — even obliquely, on the grave issue of the Pegasus snooping that stalled an entire Parliamentary session as the government neither allowed a debate nor set up a joint parliamentary committee (JPC) on the matter.

Notably, former RSS ideologue KN Govindacharya has moved the Supreme Court seeking a “fair, impartial and responsible investigation to ascertain the magnitude of use of Pegasus in India, and the entities responsible for the same”.

“Targeted nature of Pegasus has caused huge fear in the minds of the public. This illegal surveillance presents the biggest threat to life and personal liberty,” his plea said.

Meanwhile, the Modi government passed a number of legislations in Parliament without any debate or after little debate, provoking Chief Justice of India NV Ramana terming the current situation as “sorry state of affairs” as there is “no proper debate” in the House.

The fact that the Chief Justice was compelled to make the statement on the Independence Day after unfurling the national flag is reflective of the gravity of the matter.

Though the PM gave a new slogan ‘Chhota Kisan Bane Desh ki Shaan’ (Let’s make small farmer the country’s glory) and spoke of the ongoing and upcoming schemes for the welfare of farmers, he was eloquently silent on the farmers’ agitation.

The country found no answer to the question as to what will happen to the farmers protesting at the borders of New Delhi for several months against the agricultural laws that they fear will lead to the monopolization of the farming sector by big corporate companies.

As Modi sought ‘Sabka Prayas’ (efforts by all) to be added to his inclusive slogan of ‘Sabka Saath, Sabka Vikas, Sabka Vishvas (cooperation, development and trust of all) to achieve his future vision, he failed to give an assurance to the nation on this occasion of curbing the rising strident voices of communalism in the country that threaten to tear apart the social fabric of the country.

An assurance in this regard would not only have given a sense of security to minority communities feeling insecure, and satisfaction to the secular citizenry at large, but would also have added true meaning and gravity to his ‘Sabka Prayas, Sabka Saath, Sabka Vikas, Sabka Vishvas’ slogan.

Also, as the Prime Minister hailed the women’s role in India’s recent Olympics glory and urged the audience to give a big applause to the medal winners specially invited to the Independence Day function, he probably overlooked the issue of rising casteism raised by the captain of Indian women’s hockey team Rani Rampal in the wake of the casteist attacks on one of her fellow players.

Another verse of Faiz from his poem written on the Independence and Partition of India comes to mind:

Wo intezar tha jiska ye wo sehar to nahin”

(The daylight with burn scars, the morning stung by night;
No, this is the not the morning we were waiting for).

( Manoj Kumar is a senior Chandigarh-based journalist. The views expressed are personal)

‘Find it difficult to write’: Salman Rushdie speaks out after attack

London, Feb 6 (IANS) Months after a near-lethal attack that left him debilitated and without vision in one eye, Sir Salman Rushdie says that he is "lucky" and has been told...

70% of Mongolian territory covered by snow

Ulan Bator, Feb 6 (IANS) About 70 per cent of the Mongolian territory has been covered with snow of up to 60 cm in thickness, local media reported on Monday. The...

326 killed in Syria after quake