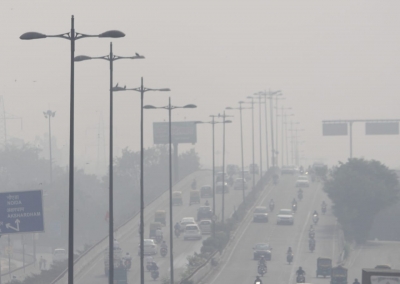 That hazy air which envelopes the city many times, or even if not hazy, the air loaded with dusty particles which is a case most of the times in Delhi and many of the Indian cities, increases one’s risk of developing a lung disease called COPD or chronic obstructive pulmonary disease. A new study carried out in Delhi has revealed just that – if one is residing in an area with high dust or particulate matter, there is more risk for COPD.

Particulate matter (PM) is a common indicator for air pollution. According to the World Health Organisation, it affects health more than any other pollutant. PM comprises a complex mixture of solid and liquid particles of organic and inorganic substances suspended in the air – mainly sulfates, nitrates, ammonia, sodium chloride, black carbon, mineral dust and water. While particles with a diameter of 10 microns or less, can penetrate and lodge deep inside the lungs, the even more health-damaging particles are those with a diameter of 2.5 microns or less. PM2.5 can penetrate the lung barrier and enter the blood system. Chronic exposure to particles contributes to the risk of cardiovascular and respiratory diseases, and even lung cancer.

The study, published in Epidemiology International, was carried out at the out-patient clinic of the pulmonary medicine department of Safdarjung hospital for one and a half years. It included 182 cases of COPD and 365 controls or people without the disease. The mean age of the male patients was around 46 years, and female patients, around 40 years.

“There is a 30 per cent increase in COPD patients living in areas where PM 2.5 is greater than 60 microgram per cubic metre. This increase is independent of other factors,” Dr Jugal Kishore, head of community medicine at Safdarjung Hospital, who carried out the research with his team, said. As high as 61.5 per cent of the COPD patients were residing in an area with PM 2.5 levels greater than 60 microgram per cubic metre in comparison to the controls at 44.9 per cent.

Exposure to dust and fumes at workplace was also found to be associated with COPD – significantly more prevalent among the COPD patients at 13.2 per cent than the control group at 2.7 per cent. Overall, PM 2.5 concentration greater than 60 microgram per cubic metre increased the risk of COPD.

Kishore added: “If somebody is living in an area with low PM2.5, there is significant less risk of developing the disease. If we control all risk factors, exposure to dust and fumes at workplace also independently increases the risk of COPD – by four times.” Therefore, the environmental history of residence in Delhi or a city with high air quality index (AQI) can play a significant role in evaluating a COPD patient.

Chronic obstructive pulmonary disease (COPD) is a progressive life-threatening lung disease that causes breathlessness. It is associated with airflow limitation, cough and sputum, and is one of the leading causes of morbidity and mortality worldwide. The development of COPD usually takes several decades.

Delhi exhibits high particulate pollution for most of the year. In fact, India, Pakistan, and Bangladesh – all feature among the countries with the highest levels of particulate pollution. The State of Global Air report, brought out by the Health Effects Institute (HEI), an independent global health and air research institute, had said that annual average PM2.5 concentrations in 2019 in India were 83 microgram per cubic metre, much higher than the safe levels.

Experts say measures should be taken to reduce pollution while more such research should be taken up. Dr P S Nayyer, consultant medicine at Delhi’s Dr BSA Medical College and Hospital, said the research was eye opening, confirming air pollution as one of risk factors for chronic airway disease. “We should do more studies in different areas with larger sample size. This will help the government to design extra measures to decrease pollution.”

Meanwhile, “to prevent COPD, people must stay indoors. Factories should move away from the city, and public transport must be promoted. During high pollution days, children should not venture out,” Nayyer suggested.

Dr Sandeep Garg, senior chest physician at Max Super Specialty Hospital, said the incidence of COPD had been increasing, and necessitated pollution mitigation measures. Besides, the government taking appropriate action, people living in such areas can on their own take measures such as sprinkling water to settle the dust. Additionally, efforts should be made to reduce smoking and exposure to second-hand smoke.

The research also linked smoking and exposure to second-hand smoke with the disease – 22 per cent of the patients in the study were current smokers as compared to 3 per cent controls. Smoking increased the risk 3.9 times. Current exposure to passive smoking at home – 19.2 per cent – and workplace – 18.7 per cent – was more prevalent among COPD patients than control at 1.4 per cent each.

According to WHO, small particulate pollution has health impacts even at very low concentrations. India’s Central Pollution Control Board has marked good and satisfactory air quality as that with PM level of 30 and 60 microgram per cubic metre, respectively.

“It is important to understand the contribution of these risk factors as curbing and curtailing them can help prevent and control the growing burden of COPD,” the study pointed out.

The prevalence of COPD in adults rises from 1 per cent in the general population to 9-10 per cent in people aged more 40 and above. The Global Burden of Disease Study reported around 251 million cases of COPD globally in 2016. It is estimated that 3.17 million deaths were caused by the disease in 2015 – that is, 5 per cent of all deaths in that year. More than 90 per cent of COPD deaths occur in low and middle-income countries. Since many patients may be asymptomatic initially or have signs that are not perceived as abnormal, global and national estimates could be less than actual numbers. – INDIA NEWS STREAM