From Babri Masjid  to Gyanwapi Mosque: BJP’s Yatra to power 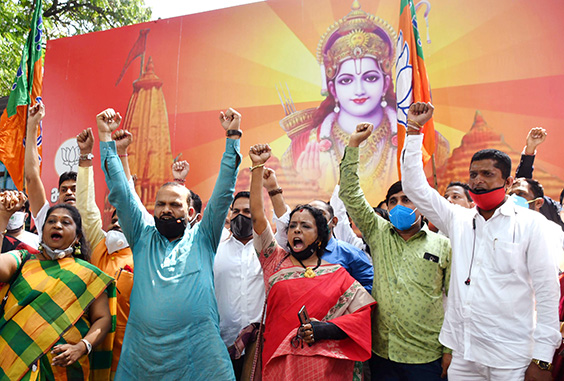 File Photo: BJP workers celebrate after the verdict on Babri Mosque demolition case by the special CBI court, outside state party HQ in Mumbai on Wednesday.

A significant difference between the Babri Masjid-Ram Janambhoomi movement and the latest legal battles over Gyanwapi Mosque of Banaras and Eidgah Mosque of Mathura is that while the first one was taken up by the Bharatiya Janata Party in late 1980s when it had only two MPs in Lok Sabha, whereas today the saffron party is at its strongest position with more than 300 seats in Parliament. Thus apparently, it should be in no hurry to make political capital out of it.

Actually it was the Vishwa Hindu Parishad which raked up the Ayodhya issue in 1984 to be followed by Faizabad district judge’s ruling of February 1, 1986 calling for the opening of the lock of Babri Masjid in Ayodhya.

The BJP took up the issue in 1989, that is several months before the Lok Sabha poll in November the same year. That was the time when the then Prime Minister Rajiv Gandhi was facing stiff challenge from his own former defence minister V P Singh who had raised the Bofors kickback issue and had on April 12, 1987 resigned from the Union cabinet over this issue.

The then BJP chief Lal Krishna Advani launched the Ramshila Pujan campaign and toured the entire country. Bricks were collected from all the cities, towns and villages for the construction of Ram Temple. This move vitiated the communal atmosphere in a large part of India leading to the infamous riots at Bhagalpur in Bihar and several other places in the last week of October.

On November 9, 1989, that is just 13 days before the first phase of poll on November 22 the Sangh Parivar organised a foundation laying ceremony of Ram Temple at Ayodhya. The foundation was laid by a Dalit from Bihar, Kameshwar Chaupal. Cornered from all sides, Rajiv Gandhi kicked off his election campaign from Ayodhya though at the same time he denounced the BJP for launching this movement.

The party came to power under the leadership of Narendra Modi in 2014, but without raising the Ayodhya, Kashi (Banaras) and Krishna Janambhoomi issue in Mathura. It improved its performance further in 2019 poll.
It is not that the saffron brigade has not raised the issue of Kashi and Mathura in the past. Demands were made even during the Somnath to Ayodhya Yatra of Advani in 1990.

Besides, it was thought that after the Supreme Court ruling on Ram Temple on November 9, 2019–exactly 30 years after the first brick was laid by Kameshwar Chaupal–the Sangh Parivar would not immediately rake up any new issue. The Supreme Court had cited the Places of Worship Act, 1991 in this regard which calls for status quo after August 15, 1947. Ram Mandir in Ayodhya was the only exception.

On August 5, 2020 Bhoomi Pujan was performed in Ayodhya with PM Modi as the main attraction. But neither Advani nor Murli Manohar Joshi, the two leading lights of the Ram Temple movement, was invited. COVID-19 restrictions were said to be the reason behind it.

It is significant to note that Banaras is PM Narendra Modi’s parliamentary constituency and the opposition parties are bound to see political meaning in everything happpening here.

Though the ruling party denies that the motive behind the latest legal battles is political on the plea that the BJP had already won the Assembly polls in March last, yet the opposition leaders allege that these moves have been taken to distract the attention of the people from the prevailing economic situation. The Assembly polls are due in Gujarat and Himachal Pradesh later this year and the next Lok Sabha poll is to take place in the summer of 2024.

True, till now no prominent BJP leader has spoken on the issue, yet Sangh Parivar think-tank is of the view that it is easier to whip up the passion against Emperor Aurangzeb than Babur. In the case of Kashi and Mathura, Aurangzeb is held responsible for the demolition of temples.

While Ram and Krishna were born in the pre-historic age the Gyanwapi Mosque had come up in 1669. Any campaign against Aurangzeb is also likely to get support from Sikhs and Marathas. Needless to mention Shiv Sena, which is running the government in Maharashtra in alliance with the Congress and Nationalist Congress Party, is obviously the greatest champion of Shivaji, known for his struggle against the Mughal ruler.

It is other thing that Aurangzeb spent the last 25 years of his life in South India primarily fighting with rebellious Muslim rulers of Deccan and died in 1707 at Ahmednagar in Maharashtra.

As he ruled for 49 long years over a much bigger territory than any ruler, he made many friends and enemies. Not only that, his style of functioning was quite different from his predecessors and successors.
But it is also a historic fact that he donated land and grants to several Hindu temples elsewhere in India. – IANS

Centre reducing fuel duty good, but it has come late

Boy, pulled out from 100-foot-deep borewell in Punjab, dies