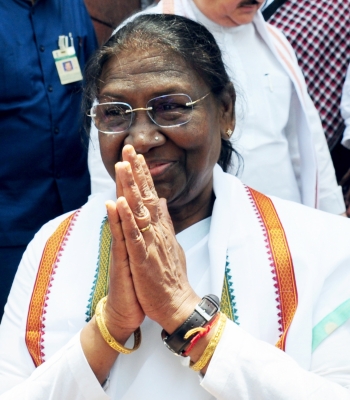 According to sources, before filing her nomination, Murmu spoke to Sonia Gandhi, Sharad Pawar and Mamata Banerjee besides leaders of several opposition parties and sought their support.

However, the Congress, NCP and Trinamool Congress, along with other opposition parties have already announced Yashwant Sinha as their joint candidate for the Presidential election. Sinha is also preparing to file his nomination on June 27.

Draupadi Murmu filed her nomination on Friday in the presence of Prime Minister Narendra Modi and senior BJP and alliance leaders. By showing its strength during the nomination, the BJP has proved that it has the numbers to make their candidate the President. In spite of this, the BJP has tried to send a bigger political message by seeking support from the leaders of major opposition parties.

Apart from JD(U) National President Rajiv Ranjan Singh and Apna Dal’s Anupriya Patel, leaders of NDA constituents were also present during the filing of her nomination papers. Leaders of the Biju Janata Dal and YSR Congress, who had announced their support to Murmu, were also present.

The last date for filing nominations is June 29. Polling will be held on July 18 and the counting of votes will take place on July 21. – IANS