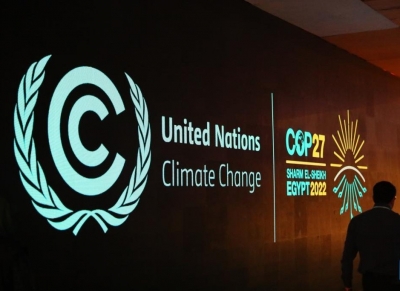 Sharm El-Sheikh:  The 27th UN Climate Change Conference (COP27) will close at least one day later than expected as climate talks continued on Saturday, with the Egyptian Presidency calling for negotiators to “shift gears” so an agreement can be reached on the remaining sticking points.

While the conference saw over 35,000 people roaming over the past two weeks, the feeling was quite different on the closing day on Friday evening.

An extended plenary discussion has been agreed for midnight on Saturday, with a formal announcement of any final text expected a day later.

In every track, the debate between countries almost seems to be where it was following the adoption of the Paris Agreement in 2015, says a negotiator.

Saudi Arabia is still talking about ignoring the Intergovernmental Panel on Climate Change (IPCC) and zero transparency carbon offsets, the US is still talking about what it is against but not what it’s for, China isn’t saying anything at all beyond its talking point on the immorality of western countries supporting fossil fuel phase out while increasing fossil fuel use in the face of the war induced energy crisis.

India has moved up the fossil-fuel phase out agenda, but not landed it, and the EU attempted to flip the script with their Loss and Damage proposal which made agreement on a facility dependent on ambitious mitigation and broadening the definition of who should supply money to fill it — aka the donor base.

As Carbon Brief points out, the EU proposal to just focus on vulnerable countries framed around the least developed countries and small islands would exclude Nigeria, Pakistan and Philippines — all hit hard in 2022 by extreme weather.

Some NGO representatives have expressed their discontent with the latest draft of the conference’s final outcome, also known as the “cover decision”.

“An EU climate damage fund for only the most vulnerable is 10 years out of date. Climate impacts are now so bad. How can you tell Pakistan for example, they can’t have access to support in the wake of 2022 floods? Delay tactic now biting rich countries,” Harjeet Singh, ActionAid, told IANS.

“It’s increasingly looking like a Glasgow ‘repetition COP’, particularly on fossil fuel phase out, there’s no progress from last year. There’s still no mention of phase out of oil and gas in the text.”

“We also don’t need a fund in name only. A fund that doesn’t specify the requirement for historic polluters to deliver finance and shifts the burden to undefined aother sources’ won’t meet the needs of vulnerable countries facing the adverse impacts of climate change,” remarked Mohamed Adow, Power Shift Africa.

In an effort to spur the talks along, UN Secretary-General Antonio Guterres on Friday morning met separately with members of the European Union and the Group of 77 and China — which comprises almost all developing countries.

“As the negotiations draw to a close, the Secretary-General urges parties to aim for maximum ambition on loss and damage and in reduction of emissions,” said Guterres in a note issued in Sharm el-Sheikh by his spokesperson.

The success or failure of COP27 depends on the inclusion of an equitable phase out of all fossil fuels in the formal outcome, says a civil society expert.

Many countries, including Vanuatu and Tuvalu as well as large producers like the US, Norway, Colombia, and the EU are already pushing for this, but more countries must show clearer leadership.

The world supports them; half a million people just signed a petition calling on a global phase out of fossil fuels.

The Egyptian presidency and other nations have a choice: will they take the opportunity to shape a historic deal, or continue to disappoint and ignore the calls for all fossil fuels in the text.

Other countries must also step up, in particular Canada and Australia are two major producers that have so far been silent. More Latin American and African governments must also recognise that a just transition to renewable energy and not fossil fuels is worth fighting for at this COP.

The current lack of language around phasing out oil and gas in the formal draft text of the UN Climate Talks will strengthen Vanuatu and Tuvalu’s call for a Fossil Fuel Non-Proliferation Treaty, an international mechanism that would see countries end the expansion of fossil fuels and manage a global just transition away from coal, oil and gas.

Responding to the EU’s proposal on a loss and damage Fund, CAN Europe Director Chiara Martinelli said, “We should acknowledge that in the past year the EU has moved significantly and is now supporting a loss and damage fund at COP27, including a new proposal to finance it by taxing polluters and fossil fuels.

“To gain support, at this final stage of the negotiations, the EU needs to strengthen the inclusion of equity and recognise the historical responsibility of big emitters, bringing new and additional funds.”

Christian Aid warned that the US and Europe should stop trying to play power politics over the creation of a loss and damage fund.

Mariana Paoli, Christian Aid’s Global Advocacy Lead, said: “It is clear that the USA and Europe are trying to divide the developing country bloc of countries at COP27.A The new proposals from the EU on a loss and damage fund is an attempt to wriggle out of commitments made under the Paris Agreement which commits rich polluting countries to cut emissions in an effort to keep global heating to 1.5 degrees Celsius.

“The EU is now trying to expand this to include lower income countries which go against the principles of the Paris Agreement, which states that it is developed countries which caused the climate crisis, that need to cut their emissions most urgently.IANS