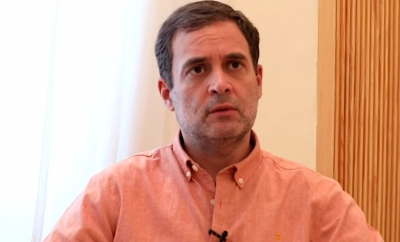 New Delhi: A day after former Congress President Rahul Gandhi slammed social media site Twitter alleging it of taking sides in the politics of the country, the US based company said that the accounts have been unlocked after the Congress leader submitted a copy of the formal consent letter to use the referenced image via its India Grievance Channel.

Besides Rahul Gandhi, Twitter on Saturday also unlocked the accounts of the Congress and several other party leaders after temporarily blocking it for violating its policy. After the party’s account was unlocked, the Congress said: “Satyamev Jayate.”

According to Twitter, Rahul Gandhi’s account was locked after the Congress leader ‘violated’ its rules by posting pictures of the family of a nine-year-old victim of alleged rape and murder in Delhi. The Congress has alleged that it was being done at the behest of the government.

In a statement, a Twitter spokesperson said, “As part of the appeal process, Rahul Gandhi has submitted a copy of the formal consent letter to use the referenced image via our India Grievance Channel.” The US based company spokesperson said, “we have followed the necessary due diligence process to review the appeal in order to protect the safety and privacy of the affected individuals”.

“We have updated our enforcement action based on the consent provided by the people depicted in the image. The Tweet is now withheld in India and the account access has been restored,” the spokesperson said.

“As explained in our Country Withheld Policy, it may be necessary to withhold access to certain content in accordance with valid legal provisions under the Indian law(s). The withholding actions are limited to the specific jurisdiction or country where the content is determined to be unlawful and remains available elsewhere. Details of the withheld content is published on Lumen notice,” the spokesperson said.

Commenting on other accounts that were blocked, the spokesperson said, “As explained, based on the written consent provided by the people depicted in the image, our teams initiated the necessary due diligence process for review. We have now updated our enforcement action and the Tweets are now withheld in India and the access to the accounts has been restored. Details of the withheld content is published on Lumen.”

Rahul Gandhi on Friday released a video statement slamming Twitter for blocking his account and alleged that the social media platform was taking sides in the politics of the country. “By shutting down my Twitter they are interfering in our political process. A company is making its business to define our politics. And as a politician I don’t like that. This is an attack on the democratic structure of the country. This is not an attack on Rahul Gandhi.”

He said that he has 19-20 million followers and they have been denied the right to an opinion.

“So, this is not only patently unfair, this is their breaching the idea that Twitter is a neutral platform. And for the investors this is a very dangerous thing because taking sides in the political contest has repercussions for Twitter,” he added.

Rahul Gandhi alleged that the democracy is under attack, opposition was not being allowed to speak in Parliament and the media is controlled. “And I thought there was a ray of light where we could put what we thought on Twitter. But obviously, that’s not the case. It’s obvious now that Twitter is actually not a neutral, objective platform. It is a biased platform. It’s something that listens to what the government of the day says,” he added.

Walking towards the Catastrophe: The Indian Scenario