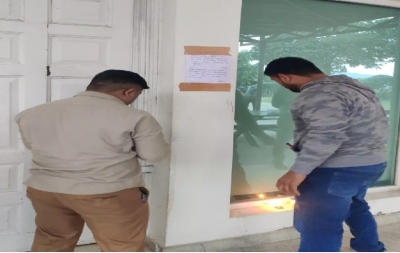 According to the officials, the sealing drive was carried out against three farmhouses in compliance with the National Green Tribunal (NGT) orders in the Sonya Gosh vs State of Haryana case on Tuesday.

“These were unauthorised farmhouses built without prior permission from the authority in the reservoir area of the lake. These were located in the Aravalli region,” District Town Planner (DTP) Amit Madholia said.

A senior officer of the department confirmed this while requesting anonymity said that one of the three farmhouses belonged to singer Daler Mehndi and was built on about 1.5-acre land.

Virginity test conducted on a female detainee or accused under investigation whether in judicial or police custody is unconstitutional, the Delhi High Court held on Tuesday. The court said that...

The Supreme Court on Tuesday declined to hear a petition challenging the appointment of lawyer Lekshmana Chandra Victoria Gowri as a judge of the Madras High Court. The Bench of...

Delhi HC refuses to pass directions in PIL seeking to conduct LS, Assembly polls together in 2024

New Delhi : The Delhi High Court on Monday refused to pass directions concerning a PIL filed seeking direction to the Central government and the Election Commission (EC) to determine...