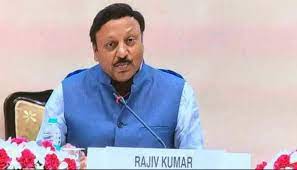 President of India Ram Nath Kovind in pursuance of clause (2) of article 324 of the Constitution, as per a notification dated May 12, issued by the Law Ministry.

This was tweeted by Union Minister of Law and Justice Kiren Rijiju in a twitter post today. Rijiju also extended his best wishes to Kumar in the tweet.

Kumar was born on February 19, 1960. He has academic degrees in B.SC, LL.B, PGDM and MA Public Policy. An officer of the Indian Administrative Service of Bihar/Jharkhand cadre 1984 batch, Kumar superannuated from the IAS in February 2020.

He then took charge as Chairman of the Public Enterprises Selection Board (PESB) in April 2020 and joined the ECI as an Election Commissioner on September 1, 2020. (INDIA NEWS STREAM)