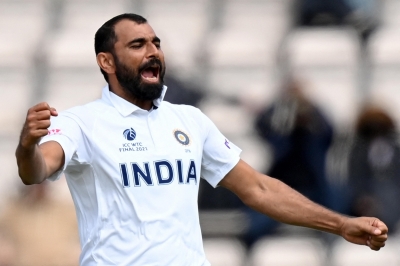 In 2018, Hasin Jahan filed a suit in the court demanding a Hasan monthly alimony of Rs 10 lakh, out of which Rs 7,00,000 will be her personal alimony and the remaining Rs 3,00,000 will be on account of the maintenance cost of their daughter.

Her counsel Mriganka Mistry informed the court that as per the income tax returns of the Indian pacer for the financial year 2020-1, his annual income for that fiscal was over Rs 7 crore, and on the basis of that, the demand for a monthly alimony of Rs 10 lakhs was not unjustified.

However, Selim Rahman, the counsel for Shami, claimed that since Hasin Jahan herself was having a steady income source by working as a professional fashion model, the demand for that high alimony amount was not justified.

On September last year after the victory of the Indian team against Pakistan at Asia Cup, Hasin Jahan shared in social media a photo of Hardik Pandya, who led India to victory with a six and there she took a veiled attack against Shami, who was not in the Indian squad.

“Congratulations. A memorable victory. Thanks to our Tigers for helping the country win. This had to happen; the country’s reputation and honour are protected by honest patriots rather than criminals and womanisers,” her post then had read. The post sparked widespread outrage among fans and many criticised Hasin Jahan for her veiled attack on Shami. – IANS