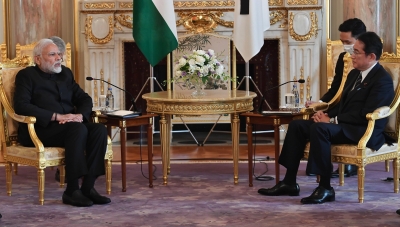 New Delhi: Prime Minister Narendra Modi, who is on a day-long visit to Tokyo to attend the state funeral of late leader Shinzo Abe, met his Japanese counterpart Fumio Kishida on Tuesday and held a bilateral meeting.

Following the meeting, Modi said in a tweet: “Had a fruitful meeting with PM Kishida. We discussed various bilateral subjects. I conveyed my condolences on the tragic demise of former PM Shinzo Abe.”

During the meeting, Prime Minister Modi noted the contributions of Abe in strengthening India-Japan partnership as well in conceptualizing the vision of a free, open and inclusive Indo-Pacific region, a statement issued by the Ministry of External Affairs said.

Modi and Kishida also discussed a number of regional and global issues and renewed their commitment towards further strengthening the India-Japan Special Strategic and Global Partnership, working together in the region, as well as in various international groupings and institutions, the statement added.

Modi is among the thousand dignitaries from across the world to participate in the state funeral being held at the Nippon Budokan arena in central Tokyo.

Abe, 67, was assassinated on July 8 while he was addressing an election campaign in the city of Nara.