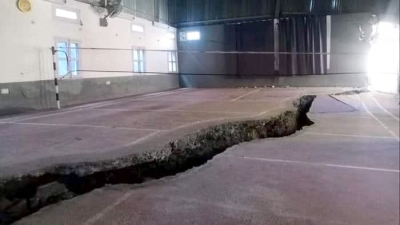 Chaoli/Joshimath, Jan 9 (IANS) The latest casualty in Uttarakhand’s Joshimath town, which is witnessing extreme land subsidence, is a temple in the Shankaracharya Math, established by Adi Jagatguru Shankaracharya, which had developed cracks and has sunk about six inches.

The Shivling inside the temple has also developed cracks. People believe that the Shivling was brought from Jaipur in 2000.

Students from all across the country come to the Math for Vedic education and learning. Currently, around 60 students are enrolled in the temple.

According to popular belief, Shankaracharya attained Vedic knowledge by meditating inside the cave, under the Kalpa tree, 2500 years ago. The same tree is on the verge of extinction today.

Apart from this, huge cracks have appeared in the buildings of the campus, and around the Lakshmi Narayan temple.

Brahmachari Mukundanand, in-charge of Joshimath temple, said that cracks had appeared in the entrance of the math, Lakshmi Narayan temple and auditorium, wherein Totkacharya cave, and Tripur Sundari Rajarajeshwari temple are situated.

Priest Vashishtha Brahmachari apprised that cracks had been observed in the premises since around an year but no one expected the situation to get out of control.

He said that efforts were being made to rectify the cracks earlier by applying cement, but the situation had worsened in the last 7-8 days.

He added that a gap had formed between the walls.

At the same time, the floor of the Narasimha temple complex has started sinking.

Places of Worship Act: SC gives further extension to Centre for its response