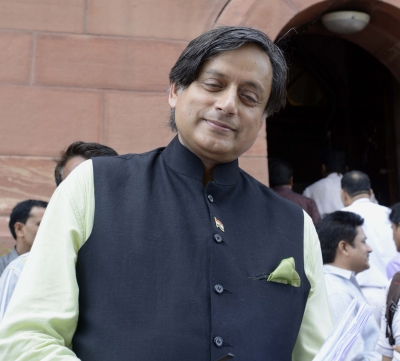 New Delhi: Lok Sabha MP Shashi Tharoor, who is contesting for the post of Congress president, on Sunday said he would be open to the idea of a public debate between the candidates in the race as it would evoke people’s interest in the party in a manner similar to the recent British Conservative Party leadership race.

Set for an electoral face-off with senior Congress leader Mallikarjun Kharge, the parliamentarian from Thiruvananthapuram told PTI that he would be “open to the idea” when asked if he would want a public debate between the party’s presidential candidates, as is seen in the recent British Conservative Party leadership race.

“There are no ideological differences among us; rather, it is a question of how we propose to go about achieving the objectives we already agree upon,” Tharoor said.

Kharge and Tharoor are contesting for the Congress’s chief post after former Jharkhand minister KN Tripathi’s nomination was rejected on Saturday.

Tharoor also got backing from senior colleagues. Senior Congress leader and Kashmiri politician Saifuddin Soz, tweeted, #TharoorElectionUpdate : Dr. @ShashiTharoor is open to a public debate with @kharge ji, should both sides agree. A public debate would attract a lot of attention for @INCIndia and would help Congress delegates and the public get a sense of the vision & plans of these leaders.” Soz is among those who have signed as proposers for Tharoor’s bid for Congress president election.

According to Tharoor, between the last date for submission of nominations and the date for polls, there are roughly two-and-a-half weeks and it would be, therefore, practically and logistically difficult to reach out to all the 9,000-odd delegates who are eligible to vote in these elections.

“In that sense, a platform where candidates can exchange their ideas and vision for the party in a constructive manner would potentially facilitate the transmission of these perspectives to more of the delegates than we can reach,” PTI quoted him as saying.

He said: “Since our current situation is widely deplored, it may be an advantage not to be burdened by the baggage of having spent too much time in the present party organisation and be able to approach it from a fresh perspective.”

He also said the Nehru-Gandhi family has held and will always hold a special place in the hearts of Congress party members.

Meanwhile, Kharge announced his “official start” to the election campaign on Sunday. “The day I filed my nomination, I submitted my resignation from my post, aligning with the ‘One Person One Post’ decision of the party taken in Udaipur. I officially begin my campaign for the post of Congress party president today,” Kharge said while addressing a press conference with other three Congress leaders Gourav Vallabh, Deepender S Hooda and Syed Naseer Hussain. Kharge tendered his resignation as the Leader of Opposition (LoP) in the Rajya Sabha on Saturday as he filed nomination papers to contest the post of president of his party a day before.