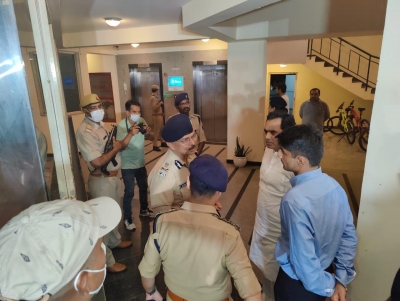 The Administration’s tough stand came just three days after Tyagi indulged in a verbal spat with a woman over the plantation of palm trees.

Tyagi had encroached the common area of the society and constructed a wooden shed that had multiple pillars below it.

The demolition exercise was carried out by the Noida Authority in the morning around 9 a.m.

As the bulldozers rolled on Tyagi’s encroached area, the residents of the society expressed happiness and also distributed sweets among themselves.

Later in the day, Additional Director General of UP police (law and order) Prashant Kumar, informed that the Uttar Pradesh Police have suspended six police personnel for their laxity in the case.

“The in-charge of the local police station has been suspended. Besides, a sub-inspector and four constables have also been suspended for laxity in work,” the senior official said.

Apart from the strict action against its own officials, Kumar said for the safety of the woman complainant, two personal security officers (PSOs) have been assigned to her.

Kumar assured that the accused Tyagi, who is still at large, will soon be arrested as multiple teams are currently working on the case.

Noida Police has also declared a reward of Rs 25,000 for the person who gives information on the location of absconding politician.

According to sources, an intense operation to nab the absconding accused is currently underway and multiple teams of the Noida Police are working in co-ordination to zero in on his location.

Sources told IANS that Tyagi’s last location was traced in Uttarakhand between Haridwar and Rishikesh and multiple police teams went there but still he was not found. – IANS

I’ve slept with hundreds of women in my head: Elon Musk’s father