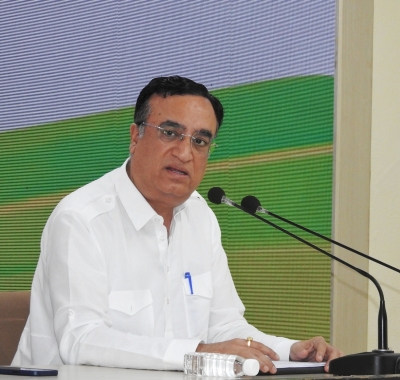 New Delhi: Congress leader Ajay Maken has expressed his inability and unwillingness to continue as in-charge of Rajasthan. According to sources, Maken in his letter to Congress President Mallikarjun Kharge has referred to the events that took place in Rajasthan on September 25.

As per sources, Maken wrote to Kharge saying that he does not want to remain in charge of Rajasthan. In his one-page letter, he has said that a new in-charge should be appointed in Rajasthan after the incident that took place on September 25 regarding Congress MLAs.

Sources said that Ajay Maken insisted in the letter that a new in-charge should be selected at the earliest in view of the upcoming Bharat Jodo Yatra in Rajasthan in the first week of December. He further expressed his desire to work on strengthening the party in Delhi.

The Congress leader said in the letter that he has been associated with the ideology of the Congress for the last three generations. He has also described himself as a soldier of Rahul Gandhi, citing his family ties with the Congress.

As per sources, Kharge has been given a free hand to choose his new CWC members, general secretaries and in-charges.

In September, the MLAs of Rajasthan Chief Minister Ashok Gehlot faction had made many serious allegations against Ajay Maken. Minister Shanti Dhariwal had clearly said that Ajay Maken had a big role in whatever happened in Rajasthan.

Ahmedabad: In June 2021, the first love jihad (Under sections of the Gujarat Freedom of Religion Act (amendment 2021)) case was registered with the Gotri police station in Vadodara city. Last...

Kabul: The spokesperson of the Islamic Emirate of Afghanistan Zabihullah Mujahid took to Twitter on Saturday to condemn a statement by a UN official as "disrespectful" to Islam, local media...

New Delhi, Nov 26 (IANS) Chief Justice of India D.Y. Chandrachud on Saturday said it is important to simplify the litigation process and make it "citizen centric", adding judges must also...

New Delhi: The administration of Delhi's historic Jama Masjid has agreed to revoke the controversial order banning the entry of women into the mosque. A source at Raj Niwas said...