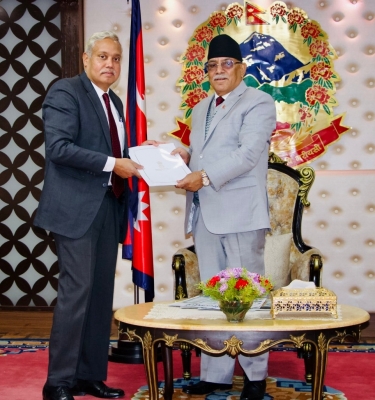 Modi was the first foreign head of the government to congratulate Prachanda upon his election as the Prime Minister of Nepal on December 25.

Prachanda’s private secretariat tweeted the photos of the meeting between the premier and the Indian envoy during which they also discussed strengthening the bilateral ties.

Srivastava, during his meeting with Prachanda, had read out the message of Modi where the latter expressed his desire and intent to work together with the new government in the Himalayan nation.

Modi says he is looking forward to working with Prachanda to further strengthen the friendship between the two countries.

Addressing the media in New Delhi on Thursday, External Affairs Ministry spokesperson Arindam Bagchi said the Indian government was looking forward to working together with the new government in Nepal and further strengthening the bilateral relations.

“Our Prime Minister congratulated Pushpa Kamal Dahal. The Nepali Prime Minister replied and said that he wants friendly relations between the countries. He talked about natural affinity. Both our countries have unique bilateral relations.

Following the November 20 election, a new government was formed under the leadership of Prachanda, the Chairperson of CPN (Maoist Centre), on December 25. – IANS

2 year-old dies in US crash, Indian-origin mother battles for life