UK reaffirms support for India as permanent member in UNSC 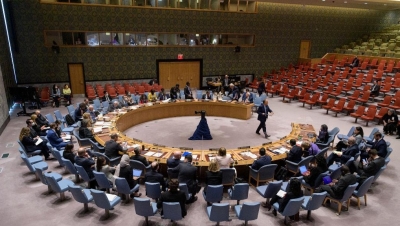 New Delhi: The UK has reaffirmed its support for a permanent seat for India in the UN Security Council (UNSC).

It has called for an expansion of the UNSC in both permanent as well as non-permanent categories and has also supported permanent seats for Germany, Japan as well as Brazil.

This was stated by the UK Ambassador to the UN, Barbara Woodward.

She said that UK’s position is well known as her country has long called for the expansion of UNSC in both the categories.

“We support the creation of new permanent seats for India, Germany, Japan and Brazil, as well as permanent African representation on the Council,” she said in her address during the UNSC’s annual debate on Security Council reform on Thursday.

New Delhi:  Bringing a cheer to Indians, Germany has relaxed its Schengen visa appointment rules with the country centralising its short-term visa processing at its centre in Mumbai. "As a...

United Nations: India has received wide praise for its leadership of the UN Security Council's Counter-Terrorism Committee (CTC) and for guiding the adoption of the Delhi Declaration on fighting terrorists using...

New Delhi: The Indian diaspora is planning a major demonstration in front of the Pakistani High Commission in London to commemorate the 14th anniversary of the 26/11 Mumbai terror attacks....

New Delhi: Saudi Arabia on Thursday announced that Indian nationals will no longer be required to submit a Police Clearance Certificate (PCC) to obtain a visa there. It is being...

Lucknow: The Uttar Pradesh government has directed officials to take action against unrecognised madrasas "as per law". According to a survey report submitted to the state government by District Magistrates,...

New Delhi, Nov 16 (IANS) Prime Minister Narendra Modi and his British counterpart Rishi Sunak will meet on Wednesday at the G20 Summit in Bali during which the two leaders will...

New Delhi: On the sidelines of the G20 Summit in Bali, Prime Minister Narendra Modi on Wednesday met his counterparts from Singapore and Italy and invited them to visit India. During...

The Beginning of the End of Jama’at-e-Islami, Kashmir