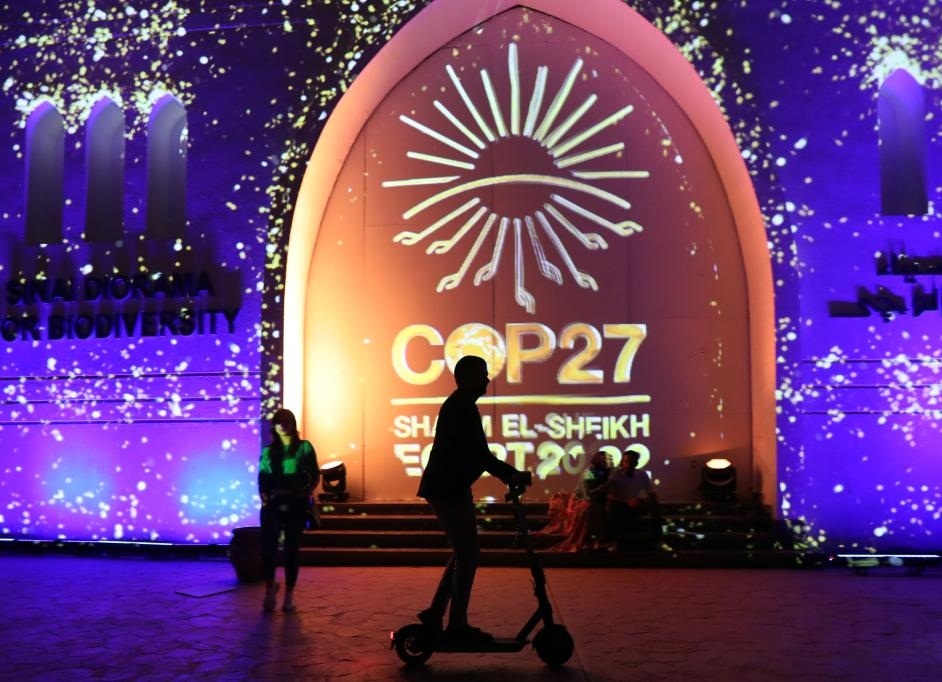 People visit the Green Zone of the 27th session of the Conference of Parties (COP27) to the United Nations Framework Convention on Climate Change in Sharm El-Sheikh, Egypt, Nov. 10, 2022. (Xinhua/Ahmed Gomaa/IANS)

This is a follow-up of Prime Minister Narendra Modi’s speech in Glasgow where he committed to India meeting net-zero goal by 2070.

India’s approach is based on four pillars that inform its climate policy landscape, namely its low historic contribution toward global warming, significant future energy needs of the country, national circumstances as it pertains to committing to low-emission growth strategies, and the need to build climate resilience.

More than 100-page document specifies that it will focus on the following seven sectoral priorities to meet India’s decarbonisation goals.

They are low carbon development in electricity systems consistent with development: The Indian government will prioritise demand side management for future planning of power systems.

The LT-LEDS also mentions the rationalisation of fossil fuels, “with due regard to energy security”. A further priority area will also be the development of green taxonomy for the power sector.

Develop an integrated, efficient, inclusive, low carbon transport system: The LT-LEDS section on transport includes priority planned actions around a phased transition to cleaner fuels. Demand side management measures have also been mentioned, along with measures on traffic management and intelligent transport systems.

Promote adaptation in urban design, energy and material efficiency in buildings, and sustainable urbanisation: Adaptation measures have been prioritised in the urban development section of the LT-LEDS along with low-carbon modes of municipal service delivery and waste management.

Promote economy-wide decoupling of emissions from growth, and development of an efficient, innovative, low-emission industrial system: India’s LT-LEDS for industrial decarbonisation depends heavily on measures to improve resource efficiency and exploration of fuel switching and electrification as and when viable.

The strategy document also places special focus on the decarbonisation of MSMEs, which have been largely absent in India’s decarbonisation story, despite carrying a significant industrial base, energy demand and being a large source of employment.

Enhancing forest and vegetation cover, consistent with socio-economic and ecological considerations: The LT-LEDS carries special focus on the restoration, conservation, and management of genetic resources contained within India’s forests, including but not limited to plant and animal diversity.

And economic and financial aspects of low carbon development: The strategy document recognises the challenges climate change and decarbonisation hold for fiscal policy and financial systems.

India’s long-term strategy shall involve the mainstreaming of climate finance and the development of new multilateral mechanisms for supporting innovation, and technology development.

Responding to the long-term low carbon strategy, R.R. Rashmi, Distinguished Fellow, The Energy Resource Institute (TERI), said: “With this, India joins the club of 57 countries that have long-term low emission growth strategies as required by the Paris Agreement. Unlike the NDCs which specify targets to be achieved in the 2030 timeframe, the long-term document is more strategic in nature. But, it outlines seven key sectors or areas of intervention where coordinated climate actions will help India move towards the eventual goal.

“However, the strategy makes it clear that the long-term vision is likely to take several decades and is contingent on the development of technologies, missions, and mainstreaming of climate finance.”

Ritu Mathur, Senior Energy Consultant, NITI Aayog, said: “India has demonstrated its commitment in terms of planning ahead and delineating the priority areas for facilitating rapid action. Identifying the challenges and opportunities is an important precursor to coherent and responsible development choices.”

“Connecting India’s net-zero target with near-term climate actions is critical to avoid investments that might be incompatible with a low-emissions and climate-resilient future.”

Vaibhav Chaturvedi, Fellow, Council for Energy, Environment and Water, said: “India’s long-term strategy follows up on the net-zero pledge and enhanced NDC goals, and cements India’s leadership. It clearly outlines key interventions across sectors that are going to be the focus of India’s efforts. Importantly, the document is an outcome of intensive stakeholder discussions.” – IANS