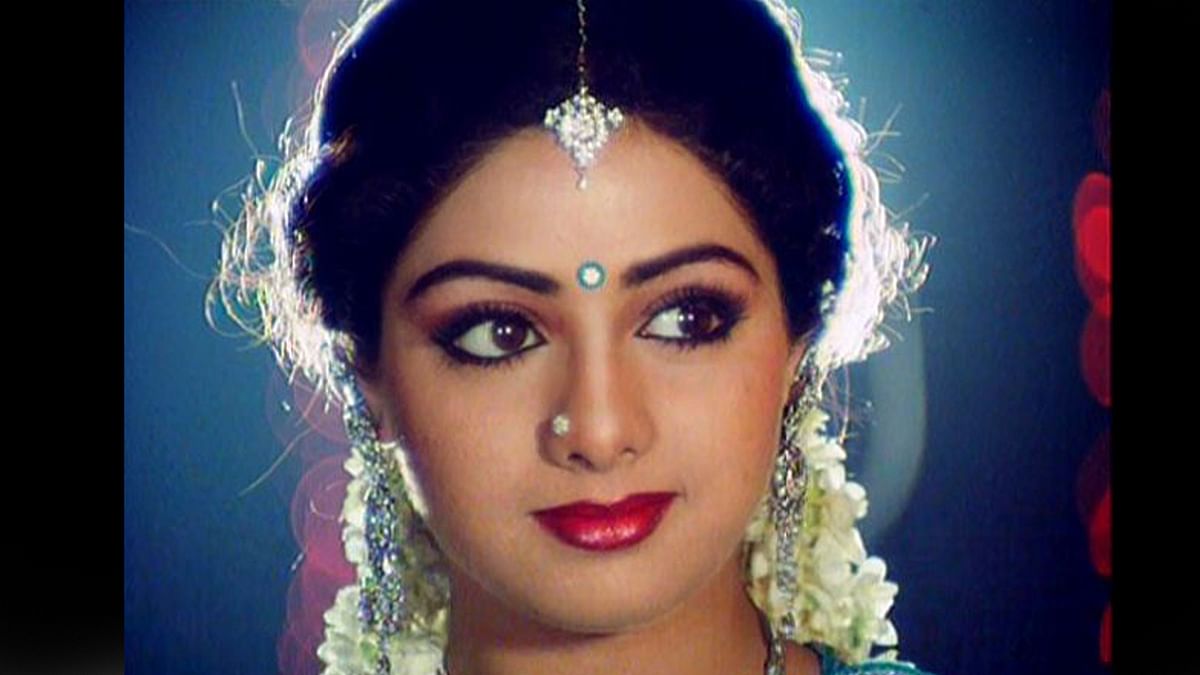 Born on August 13, 1963 at Sivakasi in Tamil Nadu, she made her acting debut at the young age of 4 in a Tamil movie. Having made her mark in south Indian cinema, she went on to make a blazing career in Hindi film industry and starred in 300 movies.

She made her presence felt in Himmatwala (1983) in which she paired with Jeetendra. Her dance numbers such as ‘Naino mein sapna, sapno mein sajna’ were an instant hit.

In Sadma (1983), which was a remake of a Tamil film, Sridevi’s poignant portrayal of a woman who regresses into her childhood after an accident, earned her critical acclaim. Kamal Haasan was her star-crossed lover in the movie.

As she progressed from Tohfa (1984) with Jeetendra to Nagina (1986) with Rishi Kapoor and Mr India (1987) with Anil Kapoor, Sridevi became one of the top heroines in the industry.

Mr India, directed by Shekhar Kapoor and based on the story of a man that goes invisible, was an iconic superhero blockbuster and it earned the ‘Hawa-Hawai’ sobriquet for Sridevi on the basis of one of its popular numbers.

Amid all these came Subhash Ghai’s multi-starrer Karma (1986) in which Sridevi shared screen with Dilip Kumar, Nutan, Anil Kapoor, Jackie Shroff, Naseeruddin Shah and Anupam Kher, among others.

Chandni, directed by Yash Chopra, became a super-hit with its song ‘Mere haathon mein nau nau churian hain’ becoming a rage among music lovers and an indispensable number at marriages.

In Khuda Gawah, which was set and shot in Afghanistan and India, Sridevi paired with Amitabh Bachchan and played a double role as an Afghan warrior and her daughter. Besides becoming a box-office hit in India, the movie also got popular in Afghanistan with a cinema hall in Kabul screening it for ten weeks in a row.

In Chaalbaaz, a slapstick comedy in which she co-starred with Sunny Deol and Rajnikanth, Sridevi again played a double role and proved her mettle in acting.

In Yash Chopra’s Lamhe too, Sridevi played a double role opposite Anil Kapoor and demonstrated her versatility in acting.

In the first half of the movie, she essays the role of a vivacious woman who is the hero’s crush, but gets married to someone else as she is elder to him. She gives birth to a daughter and dies in an accident. In the second half, she plays the part of her daughter who falls in love with the hero. While the hero resists the advances of the young girl who is half his age, the girl is determined to prove the purity and strength of her love. However, the movie with such a bold theme could not find acceptance among the audience even as it was later hailed as a cult classic.

In the mid-80s, Sridevi came close to Mithun Chakraborti and got into a relationship with him even as he was married to actress Yogeeta Bali. The relationship broke after about three years.

Later, Anil Kapoor’s brother and leading producer Boney Kapoor fell in love with Sridevi. He was the producer of not only Mr India, one of her top grossers, but also of Roop ki Rani Choron ka Raja (1993), the most expensive film of those times which bombed at box office.

Though Boney was already married to Mona Kapoor and the couple had given birth to Arjun Kapoor, he went for a second marriage with Sridevi in 1996. The couple gave birth to two daughters – Janhvi and Khushi Kapoor.

After her marriage, Sridevi’s major release was Judai (1997) following which she took a long break from movies.

After a 15-year hiatus, she made a comeback in English Vinglish (2012) which elicited a good response from the audience as well as the critics. This was followed by Mom (2017) that earned her the National Film Award for Best Actress, posthumously.

The diva of the Indian film industry met with a mysterious death in Dubai on February 24, 2018 when she got drowned in a bath tub at a hotel, depriving the tinsel world and millions of her fans of ‘chandni’ (moonlight) that she emitted through the silver screen. – India News Stream

Walking towards the Catastrophe: The Indian Scenario