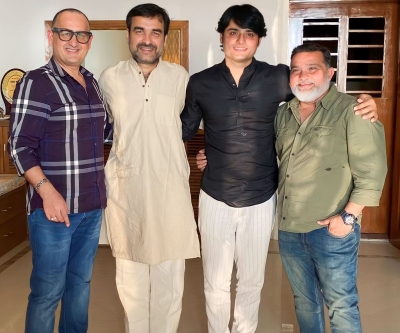 Pankaj said in a statement: “It’s my honour to portray such a humane politician on screen. He was not just a politician but so much more, he was an excellent writer and a renowned poet. Getting to be in his shoes is nothing but a privilege for an actor like me.”

The film will be helmed by three times National Award winner Ravi Jadhav, one of the renowned directors of the Marathi film Industry and written by Utkarsh Naithani, according to a statement issued by the makers.

‘Main Rahoon Ya Na Rahoon Yeh Desh Rehna Chahiye- ATAL’ revolves around the journey of Atal Bihari Vajpayee, a leader of India and one of the co-founders and a senior leader of the Bhartiya Janta Party (BJP).

National Award Winner Director Ravi Jadhav mentioned: “For me as a director, I couldn’t have asked for any better story than that of Atalji. On top of this, having an exemplary actor like Pankaj Tripathi to bring to screen Atalji’s story and the support of the producers. I hope that I can live up to people’s expectations with ATAL.”

Producer Vinod Bhanushali shared: “Unanimously, we all had imagined Pankaj Tripathi playing Atalji since we began discussing the film. We are delighted to have one of India’s finest actors playing the part.”

Producer Sandeep Singh added: “India is soon going to celebrate the life of Atal Ji and his political ideologies. We have a powerful duo of Pankaj ji and Ravi ji to bring the story to life. We aim to release this film on Christmas 2023, which also marks the 99th birth anniversary of Bharat Rana Shri Atal Bihari Vajpayee Ji.”

Mumbai: Mani Ratnam's epic movie 'Ponniyin Selvan: 1' has smashed box-office records as it stands as one of the biggest Tamil movies of all times, reports Pinkvilla. The film, which is...

Los Angeles Hollywood star Nicole Kidman received a warm welcome on Broadway Saturday evening when she made an appearance at a performance of Hugh Jackman's 'The Music Man' revival. During...

BIS moves in on fraud product reviews: Must include films

You want to buy some product and when you visit its website, there are a number of reviews related to it, mostly adorned with four or five stars. Do you...

New Delhi: The European Union Film Festival (EUFF) wrapped off its physical edition in New Delhi on November 13 and launched its virtual version from November 15 through December 15...

Mumbai: Renowned bhajan singer Anup Jalota is among 128 eminent personalities from the field of performing arts who have bagged the prestigious Sangeet Natak Akademi Awards for 2019, 2020, 2021, which...