‘Mind of a conqueror’: Kangana’s tribute to Indira Gandhi on birth anniversary 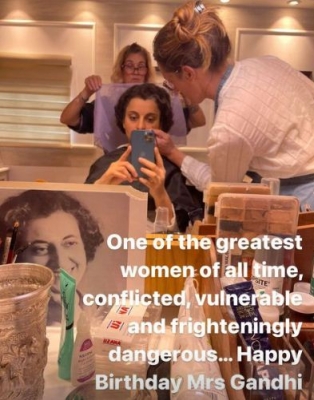 Mumbai: Bollywood actress Kangana Ranaut, who is currently busy with the shooting of her biopic ‘Emergency’, shared a special note on the birth anniversary of the former Indian Prime Minister Indira Gandhi.

The ‘Queen’ actress took to the story section of her Instagram on Saturday and shared a picture from the younger days of Gandhi. She wrote on the picture: “Why a woman is only about her body? She had the mind of a conqueror, spirit of a phoenix and power of a dictator…Happy birthday Mrs Gandhi. She has Cleopatra’s nose, Pauline Bonaparte’s eyes, and the breasts of Venus (sic).”

These words are by M.O. Mathai, who was the Private Secretary to Independent India’s first Prime Minister Jawaharlal Nehru.

Kangana also shared a picture of herself from her make-up session in her stories. In the picture, one can also see an image of Indira Gandhi placed next to the mirror for make-up reference. The actress wrote on the picture: “One of the greatest women of all time, conflicted, vulnerable and frighteningly dangerous, Happy birthday Mrs Indira Gandhi”.

‘Emergency’, which is Kangana’s second directorial after the historical action drama film ‘Manikarnika: The Queen of Jhansi’, will see Kangana stepping into the shoes of Indira Gandhi to tell the story of India’s watershed political moment of the emergency. The 21 month period of emergency saw the curbing of civil rights and also led to the rise of other political parties as the opposing forces to Indira Gandhi.

New Delhi: The European Union Film Festival (EUFF) wrapped off its physical edition in New Delhi on November 13 and launched its virtual version from November 15 through December 15...

Mumbai: Renowned bhajan singer Anup Jalota is among 128 eminent personalities from the field of performing arts who have bagged the prestigious Sangeet Natak Akademi Awards for 2019, 2020, 2021, which...

Mumbai: Actor Anupam Kher, whose this year's credits include successful Indian films - 'Kashmir Files', 'Karthikeya 2' and 'Uunchai', says he is ready to return behind the camera. Speaking...

It is the difficult time that makes you strong, says versatile Bollywood actor Nawazuddin

Naz Asghar Goa: “It is the difficult time that makes you strong,” says noted Bollywood actor Nawazuddin during a conversation on the sidelines of the ongoing Goa film festival. The...

Panaji: Actor Anupam Kher on Wednesday announced the remake of Odia film Pratikshya in Hindi, which highlights the dynamics of a father-son relationship. Anupam Patnaik, the director of 'Pratikshya', has said...

Harmanpreet Kaur on cricket and fashion

New Delhi: This year, the 16th iteration of the Blenders Pride Glassware Fashion Tour, supported by the Fashion Design Council of India, presented a version that is more youthful, inclusive,...

‘3 to 4 Drishyams’ are the tonic Bollywood needs, says Ajay Devgn

Panaji:  Union Minister for Information & Broadcasting Anurag Thakur announced on Sunday that the Indian Film Personality of the Year award will be conferred upon megastar Chiranjeevi. The prestigious...

We want to establish India as big market for film production: Thakur

Panaji: Union Minister for Information and Broadcasting Anurag Thakur on Sunday said that the government intends to make India as a destination for film shooting and production. "We have seen the...

PM Modi: IFFI and Indian cinema have carved out a niche for themselves on global stage