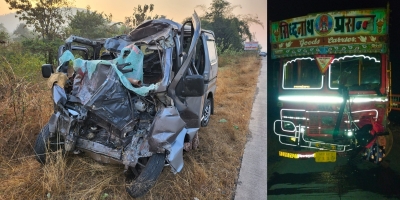 Ratnagiri/Sindhudurg: At least 11 persons were killed and another 24 injured in two separate accidents on the Mumbai-Goa Highway in Ratnagiri and Sindhudurg districts, here on Thursday, officials said.

In the first incident, at least nine persons died instantly when their car collided with a truck which purportedly lost control around 5 a.m, near Mangaon in Ratnagiri.

While five men and four women perished, a four-year-old boy was retrieved injured from the wreckage and rushed to the local government hospital.

In the second incident, two passengers were killed and 23 others hurt when a speeding private bus overturned near Kankavli village in Sindhudurg.

The bus was proceeding from Mumbai to Goa and suffered the mishap at a treacherous curve near a bridge on the Gad river, officials said.

Local villagers along with rescue teams, fire brigade and police are at the accident sites and further details are awaited.
IANS

Kathmandu : The death toll in the plane crash tragedy in Pokhara of Nepal's Kosaki district mounted to 68. "The bodies of 64 victims have been taken to the Pokhara...

New Delhi: The National Disaster Management Authority (NDMA) has issued a letter to the government authorities and scientific departments not to share details regarding ground subsidence in Joshimath with the...

Nashik: At least 10 persons were killed and five injured when a speeding private luxury bus carrying Shirdi Saibaba devotees crashed into a truck near Patharde in Maharashtra's Nashik on...

Hapur (UP): A four-year-old boy playing near an open borewell fell into it in the Kotla Sadat area in Hapur on Tuesday afternoon. Family members and officials reached the spot...

Journos have no statutory exemption from disclosing their sources to probe agencies: Delhi court