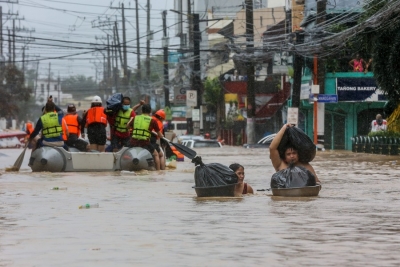 Manila: The death toll from heavy rain and floods in the Philippines has climbed to 13, with 23 others still remain unaccounted for, the government’s disaster agency said on Tuesday.

The National Disaster Risk Reduction and Management Council (NDRRMC) has tallied three deaths in the Bicol region on the main Luzon island, two in the central region, and eight in the southern region, reports Xinhua news agency.

The Council however, did not specify the cause of death.

For the missing people, the NDRRMC said eight were in the Bicol region, 12 in the central Philippines, and three in the southern Philippines.

Six others were reported injured.

The NDRRMC added the flooding displaced almost 170,000 people in six regions across the archipelagic country.

Over 45,000 evacuated people are now housed in at least 87 government shelters while the rest stayed with relatives.

The disaster agency said that almost 534 houses were either totally or partially damaged by heavy rain and flooding.

The floods have rendered at least 15 roads and three bridges inaccessible.

The national state weather bureau warned late Monday night that there will “moderate to heavy rains with, at times, intense rains” in the country and “flooding and rain-induced landslides are likely”.

Tunisha leaves behind properly worth Rs 15 crore for her mother