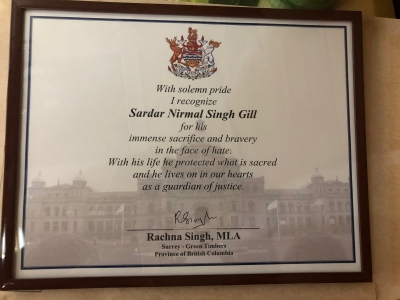 Surrey (Canada)  On the 25th anniversary of the brutal killing of Nirmal Singh Gill by the white supremacists, one of the fastest growing municipalities of Canada made a proclamation to recognize the incident.

Gill, who was a caretaker at the Guru Nanak Sikh Gurdwara in Surrey, laid down his life in the line of duty on January 4, 1998, when a group of neo Nazis came to attack the place of worship.

On Saturday, Mayor of Surrey, Brenda Locke, presented the proclamation to the relatives of Gill at a commemorative event held inside the gurdwara. Gill’s maternal grandson Paramjit Singh Sandhu came from Toronto to accept the proclamation that declares January 4 as ‘Nirmal Singh Gill Day’.

Locke, who also addressed the congregation, was presented with a robe of honour by gurdwara officials for raising her voice against a controversial bill in Quebec that prohibits people from wearing religious symbols in public service.

The law has affected turbaned Sikhs and hijab-wearing Muslim women, besides other faith groups and fuelled racial tensions.

Minister of Education and Child Care Rachna Singh, who has previously served as Parliamentary Secretary for anti-racism initiatives, was also in attendance and presented a certificate recognising the sacrifice of Gill to the temple officials for keeping the history of resistance against racism alive.

Last year, Gill’s picture was installed at the seniors’ centre located on the temple premises.

Among those who paid tributes to Gill on the occasion was anti-hate educator and former Neo Nazi Tony McAleer.

An author of The Cure for Hate: A Former White Supremacist’s Journey from Violent Extremism to Radial Compassion, McAleer has visited the gurdwara in the past to repent the episode.

Although he was never directly involved, he has taken moral responsibility for contributing to the hate through his activities that culminated into the death of Gill. He had apologised to the son-in-law of Gill when the former was visiting Canada in 2015. He had also donated money through the proceeds of the sale of his book to the gurdwara.

Imtiaz Popat, co-founder of Coalition Against Bigotry, also spoke at the event. He has made a documentary on Gill.

The speakers unanimously called upon everyone to contribute to fight back against racism that refuses to die. A message from Gill’s daughter in India, Ranjit Kaur, was read out at the event, while Sandhu recalled the memories of the last days of his grandfather in Surrey in a choked voice.IANS

Unemployment hits 50-year low in US, but inflation is bent but not broken