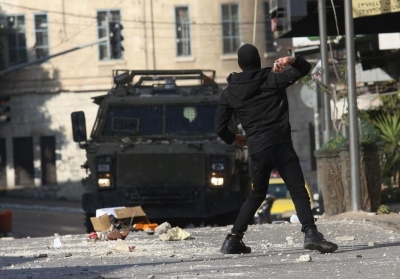 Ramallah : At least 35 Palestinians were injured by Israeli soldiers during clashes in downtown the northern West Bank city of Nablus, authorities said.

The Palestinian Red Crescent Society (PRCS) said that two of the wounded were shot by live bullets, three by rubber-coated metal bullets, and 25 suffered respiratory damage after inhaling teargas fired by the Israeli soldiers to disperse Palestinians who were throwing stones at them, reports Xinhua news agency.

Local sources and eyewitnesses said an Israeli army force stormed downtown Nablus, where they surrounded one of the houses and arrested a Palestinian militant wanted for being involved in carrying out shooting attacks on the Israeli army.

Since March, the Israeli army has been carrying out daily raids against Palestinian towns and cities in the West Bank, mainly the cities of Nablus and Jenin, following a series of attacks carried out by Palestinians that killed around 30 Israelis.

Figures from the Palestinian Authority said since January, more than 160 Palestinians including women and children have been killed by Israeli soldiers during raids on cities and towns in the West Bank.

The Palestinians demand the establishment of an independent state on the territories seized by Israel in the 1967 war, including the West Bank, the now-besieged Gaza Strip, and East Jerusalem as its capital.
IANS

New Delhi : While presenting the Union Budget 2023-24 at the Lok Sabha, Union Finance Minister Nirmala Sitharaman on Wednesday said the Indian economy is on a "right track and...