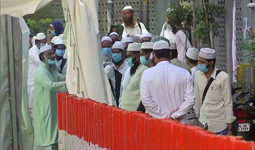 Will Conspiracy theories and ghettoisation of Muslims help India in the battle against COVID 19 ?

New Delhi: As India braces itself to face the second round of lockdown certain troubling questions are increasingly casting a big shadow over response efforts.

Are we really best preparing ourselves for what now increasingly looks like a long-drawn out battle against this pandemic, or are we permitting ourselves to unwittingly fall prey to conspiracy theories which can only obstruct our national resolve to stand up to this existential threat?

With the passage of each day disturbing reports are trickling in from different parts of the country of incidents of social and economic boycott of Muslims on the pretext of holding them responsible for the proliferation of the outbreak of this pandemic in India. The main victims of such incidents of social ostracism are small-time vendors of vegetables and fruits who proliferate Indian urban spaces and barely eke out their daily earnings.

Even as instances of highly malicious, grossly untruthful and poisonously polarising media reports on this score continue to pile up, there is hardly any evidence of official attempts to thwart this pernicious attempt to what is clearly an attempt to undermine the delicate social fabric of this country. Evidence is piling up against peddlers of hate but tragically the justice delivery system does not appear to have shown the necessary will to catch the bull by the horn.

A deep sense of persecution is gnawing away at the vitals of Muslim psyche today and coming in the wake of a bitter controversy over the Citizenship Amendment Bill this stigma of being held responsible of what some media reports so irresponsibly describe as ” CORRONA jihad” it is scarring the minority community as never before.

In the sensation mongering, which is spilling over into the country’s heartland, the vital questions connected to the national need to rebuild and resuscitate the country’s economic arterial network are being pushed to the sidelines.

With national polls years away, there is certainly no need to extract political mileage by any political group at this time of national calamity.

If highly biased and dangerously polarizing media reports aimed at Muslim bashing are not being kept in check by the concerned authorities on the pretext that the media cannot be “gagged” then this trend will acquire such menacing proportions that may prove to be difficult to reign in.

As health experts the world over are stressing the cutting edge of this worldwide endeavour to defeat this deadly disease is by building up social and health awareness needed for combating this common foe of mankind.

Building upon religious and social prejudices and superstitions are certainly not going to help. They will only lead to a further ghettoisation of urban and rural spaces in India. This will be a suicidal response because ghettoisation of marginalised communities will in fact provide a fertile soil for this virus to thrive in this vast country. There is ample evidence to show that while epidemics easily spread in ghettoised urban spaces, once an outbreak occurs it cannot be fenced inside such spaces. The CORRONA toll in new York city is grim reminder to this stark reality.

The ruling dispensation in the country will certainly have to take an urgent stock of its responsibility to curb polarising campaigns and the following of double standards in implementing its own policies for combating this pandemic.

The Jamaat Markaz controversy at Nizamuddin Delhi pertaining to the Corona pandemic has received its share, and more than its share, in media columns in India. Let the guilty be punished whosoever they be — whether they are the clerics of the Markaz or those who allowed entry of foreigners from Corona affected countries as late as the first week of March.

What is now of concern is that no government should follow double standards and different yardsticks for applying to violation of the national lock down. Just one example will suffice to illustrate just how the implementation of the lockdown can turn flawed.

Former SP MLA from Aligarh city Haji Zamiruulah Khan has earlier this week in an open letter to UP Chief Minister Yogi Adityanath urged him to take disciplinary action against the sitting BJP MLA from Aligarh city for blatantly flouting the Chief Minister’s directives on lockdown by holding a puja ceremony in a temple in which 15 to- 20 persons were allegedly present. Khan has stressed that if the ruling party legislators defy the Chief Minister’s directives then it encourages the common man to flout the advisory.

The puja ceremony which was reportedly held in the first week of April sparked a controversy after pictures of this ceremony went viral on the social media and local newspapers carried reports of this gathering at the Hanuman temple in this city.

After the incident sparked a controversy the BJP legislator claimed that he had performed a Havan for “ridding the world of the deadly Coronavirus” and his motive should not be misconstrued by the media. He stressed that only his family members and close associates were present on the occasion this does not tantamount to any violation of the lockdown.

The legislator’s explanation may or may not be justifiable.

But when the dust finally settles down on epic moment in the history of planet earth what will certainly not be forgotten by the surviving members of the human race was whether the different governments of the world realised one basic truth of human nature which has been so beautifully rendered in the line of the famous Persian poet Sheikh Sadi which today adorns the walls near the entrance of the UNO building in new York :

“All human beings are part of the same body and when the circumstances of life affect a limb, the rest of the body suffers equally. If the pain of others does not affect you, you do not deserve to be called a human being.”

Never complained against India; I am a patriot: Delhi DMC chief