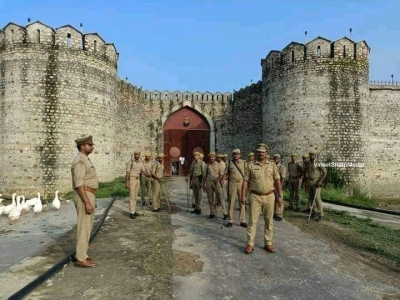 All shops and commercial establishments in Kunda have downed their shutters in protest.

Raja Uday Pratap Singh had been sitting on a dharna in Kunda tehsil premises for the past 48 hours, demanding removal of a temporary gate erected for Muharram in a village in Shekhpur Ashik area of the Kunda development block in Pratapgarh.

Uday Pratap Singh, 89, had tweeted, “In Shekhpur village located at Kunda, Pratapgarh, Muslims have built a gate of the mosque across the road, on which many things are written in their language. They are forcing the Hindus to walk under it. We suggest that all Hindus complain to the chief minister that the gate should be removed immediately.”

The district administration had been pleading with the erstwhile Raja to give up his protest, but the latter did not agree.

On Friday morning, when Uday Pratap Singh went to his Bhadri palace for a bath, the police immediately got the gates shut. As the news spread, shutters of shops were downed.

Police force has been deployed outside the palace of Raja Uday Pratap Singh. (IANS)

Cong workers clash with police in Patna, stopped from going to Guv House