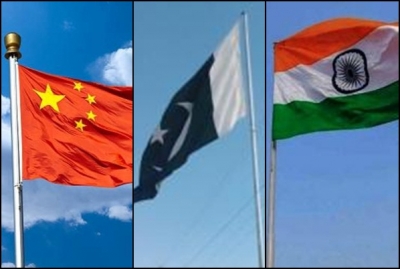 A recent event in the region has set alarm bells ringing in the Indian Ministries of Defence and External Affairs. There are reports that during the 3rd virtual meeting of the China-Pakistan Economic Corridor (CPEC) Joint Working Group on International Cooperation and Coordination with attendance by Chinese and Pakistani officials, both countries have welcomed interested third parties to benefit from avenues opened up by CPEC for mutually beneficial cooperation.

This third party has been identified as Afghanistan, as both Pakistan and China want to stay connected with the Taliban regime of Afghanistan and thus might be working closely to entice Talibani rulers to become part of the extended CPEC under the Chinese Belt and Road Initiative (BRI).

The meeting was co-chaired by Pakistan’s Foreign Secretary Sohail Mahmood and China’s Assistant Foreign Minister Wu Jianghao. The senior Pakistani and Chinese officials discussed the possibility of extending the CPEC to Afghanistan in order to promote economic development and prosperity in the war-ravaged country, it is reported.

The official statement and the remarks made by two countries’ officials harped on sympathy for Afghanistan and its people. The statement said the two sides exchanged views on the political and security situation in Afghanistan, humanitarian assistance by Pakistan and China to Afghanistan, and other matters of mutual interest.

Sohail Mahmood underscored Pakistan’s commitment to a peaceful, stable, prosperous and connected Afghanistan. He highlighted the provision of humanitarian assistance to Afghanistan including Pakistan’s relief efforts in the wake of devastating earthquake in eastern Afghanistan on June 22.

Mr Mahmood also stressed the need of de-freezing of Afghanistan’s foreign reserves and facilitation of banking operations to ease the economic hardships of the Afghan people and help build a sustainable economy.

He further underlined the importance for the Afghan side to address the international community’s expectations regarding inclusivity; respect for the rights of all Afghans, including girls’ education; and effective counter-terrorism measures. He underscored that the international community’s focus should not be diverted from the dire situation in Afghanistan owing to events taking place elsewhere.

But so far China has not been able to keep-up its promises in Afghanistan. In 2008, a Chinese company won a 30-year lease $3.5 billion to develop the Mes Ayank copper mine in Logar province to extract copper. The mine is believed to have the world’s second-largest copper deposit, valued at $50 billion. However, progress on the project has been very slow, with the previous Afghan government even mulling legal action against the Chinese company, though the deal remains in effect.

In addition, another Chinese project in Afghanistan, which has made little progress, is a contract to develop three oilfields in Faryab and Sar-i-Pul. The Brookings Institute report notes that the Chinese government officials and experts on Afghanistan have confessed that China sought those bids simply to pre-empt other countries from gaining the concessions, while expecting full well it would not start developing its concessions for years to come due to insecurity and the corruption of the Afghan government.

Besides this, Afghanistan is believed to have large deposits of gold, iron, copper, zinc, lithium and other rare earth metals, valued at over $1 trillion. China’s game plan might be to get control of untapped deposits of lithium and rare earths in Afghanistan, which would prove a major advantage for Beijing in its evolving competition with the US and Europe for these resources. In 2019, the US imported 80 per cent of its rare earth minerals from China, while the EU states got 98 per cent of these materials from China. Thus, the sympathy for Afghanis is not without any catch on part of China.

Pakistan’s benefit
Pakistan by working closely with China and enticing Afghanistan to embrace BRI projects, is trying to stay relevant in Afghan politics and the central Asian region too. Though the Taliban authorities seem wary of any Pakistani interference in their internal affairs, but Pakistan fully understands that if it wants to be seen as an effective player in the region, then it should be seen as being active and effective in Pakistan by the global players.

However, in reality there is no blood lost between the Taliban rulers of Afghanistan and Pakistan’s military establishments, and in fact during the last six months both have engaged in cross fire across the border, over the issue of border fencing by Taliban forces. Thus, Pakistan’s gain could easily be fathomed in the garb of affection for Afghanis.

India’s position
As such, New Delhi may look at these developments with unease. CPEC encompasses disputed territory with both Pakistan and China and has unresolved boundary disputes with China. In fact, occasional skirmishes continue to occur along the extensive contiguous un-demarcated India-China border.

For Delhi, the future scenario is worrisome due to China’s growing influence in the region, Pakistan getting closer to China and China’s potential plans and strategy might tilt in favor of Pakistan and China may work with Pakistan to force India out of Afghanistan’s reconstruction plans.

Delhi would also be skeptical of Pakistan’s growing closeness with China as this may make Islamabad more indebted to Beijing and it may be more compliant to the latter’s larger ambitions in the region. CPEC may have a game-changing impact on the regional balance of power, tilting it in China’s favor, much to India’s chagrin.

Overall, any joint foray by India’s neighbor in Afghanistan may prove to go against the Indian plans for re-emerging as an active player in Afghanistan’s reconstruction. Any move by India in this regard to counter Pak-China initiative will be keenly watched by the global players. – INDIA NEWS STREAM

Asad Mirza is a political commentator based in New Delhi.
He was also associated with BBC Urdu Service and Khaleej Times of Dubai.
He writes on Indian Muslims, educational, international affairs, interfaith and current affairs.
www.asad-mirza.blogspot.com