With no party likely to get a majority in J&K, Azad is the elephant in the room 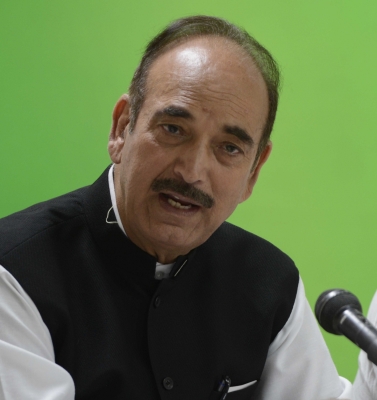 Srinagar: Politics often makes for strange bedfellows, but not stranger than the National Conference (NC) and People’s Democratic Party (PDP) in Jammu and Kashmir.

The PDP was founded in 1999 by the late Mufti Muhammad Sayeed to challenge the political might of the NC as a Valley-centric mainstream party.

The two remained arch rivals till August 5, 2019, when Article 370 was abrogated and the state downgraded to a Union Territory.

The constitutional upheaval also changed the political map of J&K. The two arch rivals made common cause to join the People’s Alliance for Gupkar Declaration (PAGD).

Suddenly, NC president Farooq Abdullah and PDP president Mehbooba Mufti shared a common platform for what they called ‘a greater cause’ — to fight for restoration of Article 370 and statehood for J&K.

The BJP had fulfilled its over 70-year-old commitment of complete integration of J&K with the rest of the country with the slogan of ‘Ek Nishan, Ek Vidhan, Ek Pradhan’.

Till 2019, regional political parties including the NC and the PDP fought elections, revolving their poll campaigns around the special status of J&K.

The NC claimed to fight for complete internal autonomy and the PDP fought for self-rule, the two slogans being the two faces of the same coin.

Now, when the restoration of Article 370 remains a far cry even in the minds of the strongest supporters of the NC and the PDP, the two parties don’t agree on giving up the ‘fight for the greater cause’.

The abrogation has been challenged in the Supreme Court and both the NC and the PDP have accepted that the decision of the apex court would be binding.

The ‘big fight for the greater cause’ is unlikely to amuse the voters in terms of assembly seats, but keeping distance from New Delhi is the only way any regional political party can justify its existence.

In terms of development, employment, empowerment of the common man, the NC and the PDP do not have a larger claim than the other. Both these parties have ruled the state in terms although the innings of the NC was much longer than the PDP.

NC vice president, Omar Abdullah recently chaired a provincial party meeting in which it was decided that the NC would field candidates for all the 90 assembly seats.

This had nixed the prospects of any electoral alliance between the two PAGD constituents till NC president Farooq Abdullah stepped in to do some damage control. He said who fights on how many seats would be decided only when the elections are announced.

The only chance these two parties have to survive in the changed political scenario would be to fight the elections in alliance, but the power ambitions of their leaders might not allow the alliance to last long even if it is announced.

The entry of former senior Congress leader, Ghulam Nabi Azad has left the fate of seats won by the NC in the Jammu division in the past wide open. Azad has personal influence and goodwill in Poonch, Rajouri, Jammu, Kathua, Samba, Udhampur and Reasi districts as well.

This personal goodwill might not necessarily translate into the number of assembly seats his party wins in these 7 districts but it could decide who loses the elections in those districts.

Azad does not have much political clout in the Valley. The Peoples Conference (PC) headed by Sajad Gani Lone and the Apni Party headed by Syed Altaf Bukhari are likely to challenge the NC and the PDP in the central and northern parts of the Valley. Azad could well be an elephant in the political china shop of the Congress, NC and the PDP especially in the Jammu division that has 43 seats in the 90-member UT assembly.

How many seats the PC and the Apni Party win must be watched, but the seats where these two parties are going to challenge the NC and the PDP are no longer a foregone conclusion for the otherwise well entrenched NC in such areas.

Whatever the party positions after the assembly elections in J&K, it would be naive to believe that the NC and the PDP either separately or in alliance can win a simple majority in the forthcoming assembly polls.

Having said this, the BJP despite its strong position in Jammu, Samba, Kathua, Udhampur and Reasi districts of Jammu division will have to fight hard to establish a firm hold in Poonch, Rajouri, Doda, Kishtwar and Ramban districts of the same division.

Will the BJP manage to get a simple majority of 46 seats out of the 90 assembly seats during the forthcoming assembly polls?

Well, the answer as of now is ‘No’. Who aligns with whom after the assembly polls in J&K still baffles some of the most astute political analysts.