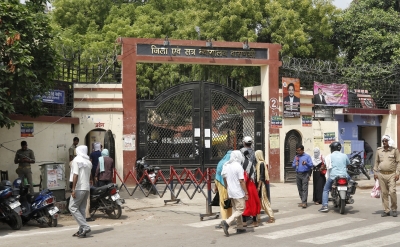 Varanasi: The Varanasi district judge has reserved the ruling in the Gyanvapi mosque dispute case.

The verdict is expected to come on Tuesday.

The Hindu side has sought permission for daily worship of Shringar Gauri in Gyanvapi complex and also permission for worship of ‘Shivling’ found in ‘wuzukhana’ of the mosque. They have also sought removal of debris in the passage leading to the room under ‘Shivling’.

The Muslim side has opposed sealing of the wuzukhana area and seeks considering Gyanvapi survey and case with reference to the Places of Worship Act, 1991.

During the proceedings, the maintainability of the Places of Worship Act 1991 was raised by the Muslim side. The bench headed by Varanasi distinct judge Dr A.K. Vishvesha also accepted the copy of the survey report submitted by ousted commissioner Ajay Mishra.

In another important development, the Hindu side has filed an application under 156 (3) CrPC before Chief Judicial Magistrate for registration of FIR under sections 153A(2) and 505 (3) IPC against persons who allegedly performed wuzu (between May 16-19) in the wuzukhana where ‘Shivling’ was stated to be found.

Notably, the Varanasi civil court, as well as the Supreme Court had ordered the site to be protected, and alternate arrangements be made for wuzu elsewhere.

The Supreme Court bench headed by the bench of Justices D.Y. Chandrachud, Surya Kant, and P.S. Narasimha on May 20 had ordered the transfer of the Gyanvapi mosque case to the district judge, Varanasi.

While hearing Anjuman Intezamia Masajid Committee’s plea against a Varanasi court order, which directed a videography survey of the Gyanvapi Mosque complex close to the famous Kashi Vishwanath Temple, the top court said that a senior and experienced judicial officer of Uttar Pradesh Judicial services will hear the case.

The Court also directed the district magistrate to make appropriate arrangements for wuzu at the masjid.

The May 17 interim order for sealing the spot where the Shivling was found, without impeding namaz will continue till the Order 7 Rule 11 application is decided, the court ruled, and asked for alternate arrangements to be made for wuzu. – IANS

Scientist jumps off IT Ministry office in Delhi, dies

SC: Use of violence not an essential condition to invoke provisions of MCOCA