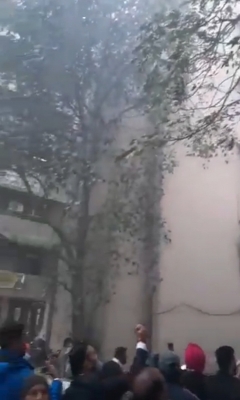 Chandigarh: At least two people were dead and five received injuries in an explosion in the district court complex of Ludhiana city in Punjab. Chief Minister Charanjit Channi is reaching the spot to assess the situation.

The court complex is located close to the district Commissioner’s office.

The explosion took place in the washroom on the second floor at around 12.2 p.m., said the police.

Not many people were present at the time of the explosion owing to strike by lawyers. One of the injured has been identified as advocate R.S. Mand.

According to sources, the top Home Ministry official has spoken to the Chief Secretary of the state and sought a report on the blast that occurred in Court premises in Ludhiana.

It is also learnt that the teams of National Investigation Agency and National Security Guards have been sent to Ludhiana to collect evidences while the blast incident is being investigated by the Punjab police.

According to the preliminary report, the blast took place around 12.25 p.m. on the third floor of the court premises. The Court advocates are on strike, therefore less number of advocates were present when the blast took place. The intensity of the blast was so huge that it damaged nearby walls and shattered window glasses.

“There has been a blast in Ludhiana. I have wrapped up a meeting and will be heading to Ludhiana soon,” Channi was quoted as saying.

He said the guilty won’t be spared. He said since elections in the state are near and the government is on alert regarding such incidents.

Chief Justice of India N.V. Ramana said here on Thursday that he is deeply shocked to hear about the news of explosion that rocked the Ludhiana District Court Complex in Punjab.